17u Cavaliers roll past Jazz in Dwight Harris Summer League 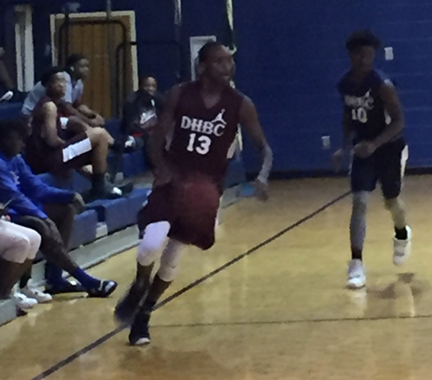 : Jakontist Gordon with the basketball for the 17u Cavaliers. He scored six points in their 66-36 win over the Jazz in the Dwight Harris Boys Club Basketball Summer League. Photo by Ken Gustafson

AMERICUS – Led by Quevoluia Willoughby’s 21 points, the 17u Cavaliers took over in the second half and never looked back on their way to a 66-36 win over the 17u Jazz on Thursday night, June 28, in the Dwight Harris Boys Club Basketball Summer League being played at Ninth Grade Academy.

The Cavaliers did it partially with pressure defense, forcing the Jazz into committing turnovers and getting points off of those turnovers. Jacoby Pride was also in double-figures for the Cavaliers, scoring 13 points. Kanova Willoughby scored nine points. Luther Alford scored seven points, including one three-pointer. Jakontist Gordon also chipped in six points for the Cavaliers.