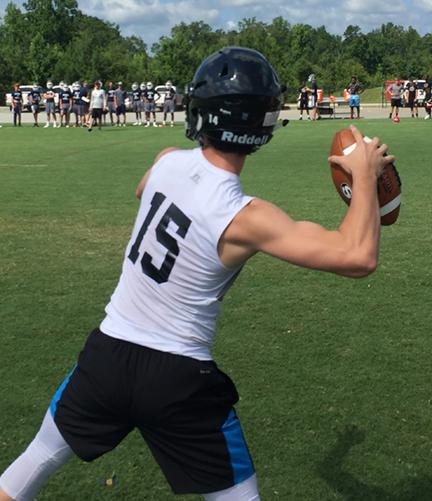 BUENA VISTA, GA – The Southland Academy football team had a joint seven-on-seven practice against Marion County and Baconton Charter on Thursday, June 28, as part of their summer practices to get ready for the upcoming 2018 season this fall. It was a three-team practice involving Southland, Baconton Charter and the host school, Marion County.

According to Southland Head Coach Rod Murray, he was very pleased with his team’s performance at the Marion County practice and with the progress of the team throughout the Summer.

“First of all, I want to thank Chris Kirksey, the Marion County Head Coach, for hosting us. He does a great job with his kids over here,” Murray said. “We got a lot of work done today, as you saw. Our kids have been showing up in the weight room. This is the time of year that we’re getting stronger and they’re getting to know one another. You’ve got to work together and trust one another. We’ve been working hard. We’ve got a lot of older guys. Guys have already graduated, but that legacy is still with our older guys. These guys do a great job of helping the young kids and nurturing them as we go along. We’ve had a great summer so far, and we still have a month to go before we open up practice.” Murray went on to say that the players at the skilled positions, particularly the wide receivers, are moving around and understanding route combinations. He also said that the defensive players are understanding what they need to do. “We’ve had a great Summer so far,” Murray said. “We just want to finish the way we started.” 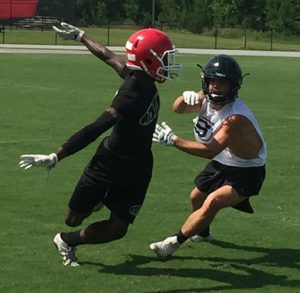 When asked if there were any particular individuals who stood out, he said that at this time of the year, it’s about getting everything installed. “Once they put pads on and someone tackles them, that’s when I can answer that question a little better.”

Southland Defensive Coordinator Mike Smith was pleased with the way his defense performed in the drills at Marion County. “It’s the first time this season that we’ve had a chance to get out here together,” Coach Smith said. “Actually, it’s going pretty good, but we’re in our early stages, hoping to take a lot of these reps and get better. We’ve got some good athletes that can play some different positions and hopefully, we’ll get them in the right spots.” As far as any battles for starting positions on defense, Smith said that will be decided later this summer and into Fall practice. 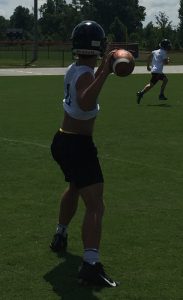 Southland rising junior quarterback Landon Law throwing the football near the end of the tri-practice.
Photo by Ken Gustafson

Landon Law, a rising junior, is currently slated to be the starting quarterback at Southland Academy when the 2018 season starts this fall. Overall, he is pleased with the way he and his offense has performed in the Summer workouts. He also said that practicing against another team really helps him and his teammates in their preparation. “This helps us a lot with getting our reps down and working against other people instead  of just running routes on air,” Law said. By “on air”, Law meant putting an offense on the field and executing plays with no defense to challenge them. “Having a defense out there helps me with my reads. It makes it more game-like,” Law said. “Our offense is doing a good job of finding the open guy right now. Somebody’s open every single play. Our wide receivers are running some good routes to get open. We’re all working hard to get a starting spot right now.”

Chandler Studdard, a rising senior who plays both defensive end and tight end for the Raiders, says that the team is working very hard to get ready for the season. However, he knows that he, along with his teammates, have some things they need to improve on. “We’ve got to work on getting stronger and quicker,” Studdard said. “Everybody has been working in the weight room. That’s what we need to keep on doing to finish the summer.” 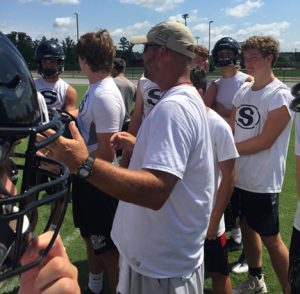 Southland, like Schley County, Americus-Sumter and every high school football program in Georgia, participates in summer workouts and seven-on-seven practices throughout June and July before Fall practice officially begins Wednesday, August 1 for both GHSA and GISA schools.

Southland’s offense and defense went up against the offenses and defenses of both Marion County and Baconton Charter. Both of Southland’s quarterbacks, Landon Law and rising sophomore Nathan Duke, showed strength and accuracy in their throws and are capable of doing the job for the Raiders.

The week of the fourth of July is called a “dead week” in the GHSA. During that week, all team practices must cease until the following week.