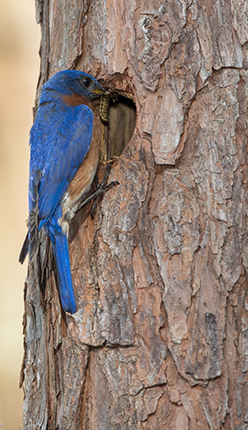 An Eastern Bluebird with a green worm..

Here’s a trivia question for you: What kind of bird would be sitting on your shoulder if you were singing “Zip-A-Dee-Doo-Dah, Zip-A-Dee-A?”
The answer is of course — Mister Bluebird. If you are familiar with the 1946 Disney classic, “Song of the South,” you would know the answer. Of course, being over the age of 60 is of great help! So, let’s explore one of the most beloved and colorful of our song birds.
In North America, there are three species of bluebirds: the Western, Mountain and Eastern Bluebird. In Georgia and the southeast U.S. the Eastern Bluebird makes its home.
Eastern Bluebirds are members of the thrush family. Their cousins are American Robin and the melodious songster Wood Thrush. The sexual dimorphism of Eastern Bluebird makes it easy to distinguish males from females. They are covered in a gorgeous blue mantle on their head, back and wings. A red-orange color paints their throat, chest and flanks while the belly is white. Without a doubt, they are arguably the most popular song bird in North America.
Some 60-odd years ago I would visit my paternal grandparents in an area of north Atlanta known as Brookhaven. Back then my grandfather described Brookhaven as being “plum-nelly.” He was “plum” out of the city and “nelly” in the country. And on his five-acre property my grandfather had built and erected a bluebird nest box.
During the spring whenever my grandfather and I were outside doing some kind of chore like mowing grass or yard cleanup, one or both of us kept an eye on the next box. When an Eastern Bluebird would land on the artificial nest cavity, all work literally ceased as we stared in wonder and amazement. It was the most beautiful bird I had ever seen at the tender young age of nine years old.
If I had to venture a guess as to why Eastern Bluebirds are so very popular and endearing to us humans, my first guess would be that beautiful blue coloration. Is there anyone that doesn’t love a bluebird? Females are similar to the males but just a bit duller in coloration.
Another guess is the fact that they can easily be attracted to artificial nest boxes. Bluebirds are secondary cavity nesters taking advantage of abandoned woodpecker cavities, rotted out knot holes on trees and even old wooden fence post cavities. Bluebird nest box plans are readily available and easy to build.
Eastern Bluebirds are easily attracted to backyard feeding stations. Although their diet is primarily insects with some fruit, they will visit suet feeders and meal worm offerings. At the present time, my blueberry plants are yielding their delicious fruits and the bluebirds are right there helping themselves.
A final reason they are so popular is their song. Their somewhat cheery song reminds me of water softly cascading over rocks. At www.statesymbolsusa.org they describe the song as, “a rich warbling whistle broken into short phrases.” And two states claim the Eastern Bluebird as their official state bird: New York and Missouri.
As I sit and watch the bluebirds in my yard I am amazed at how keen their eyesight is. They often perch on a utility wire or tree limb and watch for movement in the grass or weedy areas. Directly they will launch themselves into flight, often flying a considerable distance, to nab an unsuspecting insect. I then think, “How did that bird see that small of an insect over such great a distance?”
The only reason I can come up with is that’s the way they make a living. Movement in the grass could potentially be one of two things: something the bird can eat or something that could eat the bird. It pays to be aware of your surroundings if you are a bird and want to live to a ripe old age.
Two years ago, I noticed a male bluebird that seemed to follow me around as I attended to my yard chores. Perhaps he was looking for any insects that I might accidentally disturb. So, I devised a plan.
My wife and I would sit in our backyard outdoor swing by Lake Jennifer and toss very small morsels of our homemade suet toward the birds. Most of the time the bluebirds grabbed them out of mid-air without the suet ever making landfall. At that particular time, they were feeding young and couldn’t seem to get enough food offerings to the rapidly growing babies.
For sure the bluebirds provide us with hours of entertainment as they fly around our backyard filling it with a cheerful song. I do believe that our stress levels were greatly lowered by the birds in my backyard.
Remember to enjoy our native birds and please keep your cats indoors.