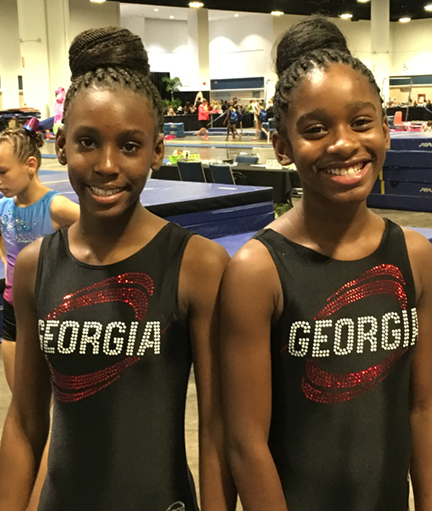 Taylor Rush left) and Jayla Hawkins (right). Rush won the National Championship in her age group with a score of 9.6 in the vault competition. Jayla Hawkins finished in third place on the balance beam. Submitted photo 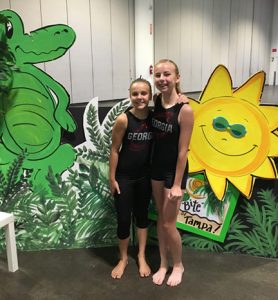 Angel Cobb (left) and Kayleigh Cox (right). Cobb was the national runner up in her age group on the vault with a score of 9.6 and also in the all-around competition. Kayleigh Cox had an outstanding performance on the uneven bars, scoring a 9.3.
Submitted photo

Melissa Singley, gymnastics instructor for the SCPRD, could not be prouder of her gymnasts’ accomplishments. “We are so proud of how hard these girls have worked this past year leading up to this meet,” Singley said. “There was some very tough competition at Nationals and these gymnasts really rose to the challenge. Many of these girls had a personal best on one or more events and in their all-around score. We are looking forward to watching these gymnasts and all the gymnasts of Sumter Gymnastics learn and grow in the future to hopefully bring home more state, regional or national titles in the coming season.”

“Melissa Singley works hard with kids in various age groups to offer a complete gymnastics experience here in Sumter County,” SCPRD Director Tim Estes said. With the soon to be completed expansion of the gymnastics facility at The Columns, we will be able to offer the next level in this program to our gymnastics family.”