17u Rockets win overtime thriller: 14u Jazz take care of business against Warriors 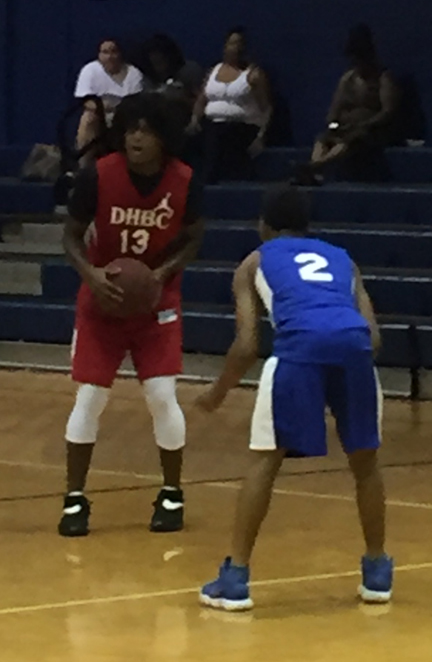 The 17u Rockets’ Lakeviyon Walker (13) scored 24 points to lead his team past the 17u Warriors in overtime. Photo by Ken Gustafson

AMERICUS – The July 4 fireworks began a day early at the Dwight Harris Boys Club Basketball Summer League as the 17u Rockets defeated the 17u Warriors 59-56 in a thrilling overtime victory on Tuesday, July 3, at Ninth Grade Academy.

“We’ll take it. I don’t like the game being too close. My heart hurts,” 17u Rockets Coach Korby Moore said. “We did a really good job on the boards. We’re trying to get these kids ready for the fall.” 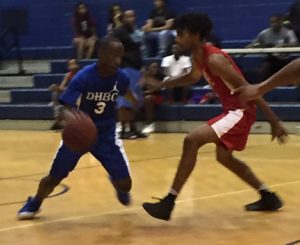 The 17u Warriors guard Jaheim Banks (3) with the ball.
Photo by Ken Gustafson

For the Warriors, they were led in the first half by Adam Smith with five first-half points. Jacoby McCuller had four. Jequarius Mitchell scored three points and both Jaheim Banks and Latrayvion Bridges scored two points each. 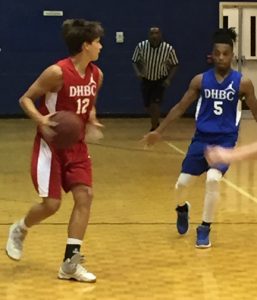 Owen Exley with the ball for the 17u Rockets. He scored four points in their 59-56 overtime win over the 17u Warriors.
Photo by Ken Gustafson

A couple of minutes later, the score was tied at 49-49, and the Warriors had the ball with 15 seconds left. Jaheim Banks was fouled and made both free throws, giving the Warriors a 51-49 lead. However, the Rockets’ Milton McCoy drove coast-to-coast for a layup to tie the score at 51-51 with seven seconds left. The Warriors had one last chance to win it in regulation, but Hashim Haughabook’s three-point attempt at the buzzer fell short, forcing overtime. 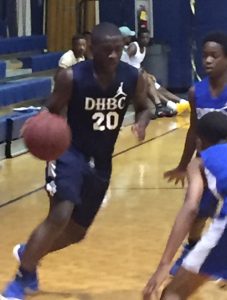 In the overtime period, the Rockets went up by four on two free throws by Shomari Gaines and a basket by Lakeviyon Walker. Banks responded by scoring a basket to cut the Rockets’ lead to 55-53 with 46.7 seconds left in overtime. However, Walker scored again to put the Rockets back up by four at 57-53 with 27.8 seconds left. The Warriors tried to get back in it as Banks was fouled. However, he was only able to make one of two free-throws, making the score 57-54 Rockets.

The Rockets had the ball with 19.6 seconds left. Shomari Gaines was fouled and made one of two free throws. The Warriors’ Jordan Wiley responded by scoring to cut the lead to 58-56 with 12.4 seconds left. However, that would be as close as the Warriors would get as they fell to the Rockets 59-56 in overtime.

Lakeviyon Walker led all scorers with 24 points. The Rockets had another player in double-figures. Milton McCoy scored 10 points. Shomari Gaines scored nine points. Both Chancery Jackson and Kyvone Wilson each had four points, and both Martavious Johnson and Tabious Laster each scored three points to round out the scoring for the victorious Rockets. As for the Warriors, they were led in scoring by Jordan Wiley with a total of 13 points. Both Jequarious Mitchell and Jacoby McCuller each scored nine points. Adam Smith and Quandarious Hightower each scored five points, and Latrayvion Bridges scored two points to round out the scoring for the Rockets. “I thought it was a great game,” Warriors Coach Rundy Foster said. “It’s summer and we’re just trying to get the boys ready for the fall and winter.” 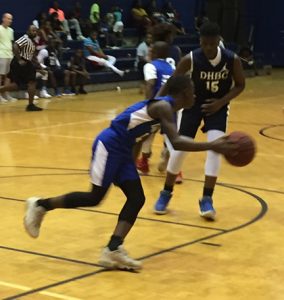 : Brandon Pope with the ball for the 14u Warriors. He scored 16 points in the loss to the Jazz.
Photo by Ken Gustafson 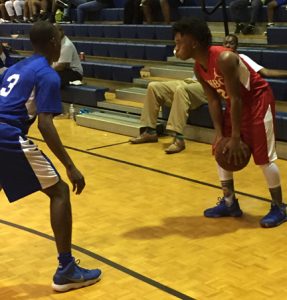 17u Rockets guard Milton McCoy is being guarded by Jaheim Banks of the Warriors. McCoy scored 10 points in the Rockets’ 59-56 overtime win.
Photo by Ken Gustafson

8u Sumter County All-Stars finish in third place in…