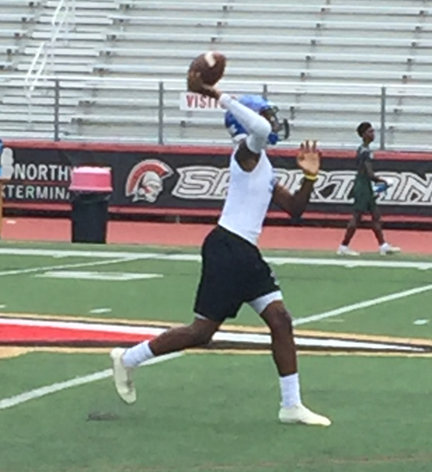 ASH quarterback Kierston Harvey back to throw in one of the games at the seven-on seven tournament at Greater Atlanta Christian School in Norcross, GA. Photo by Ken Gustafson

NORCROSS, GA – As part of the summer training to get ready for the 2018 season, the Americus-Sumter football team traveled up to the Metro Atlanta area on Thursday, July 12, to compete in a seven-on-seven football tournament at Greater Atlanta Christian School in Norcross, GA.

Along with the Panthers and the hosts, Greater Atlanta Christian, local Atlanta area schools such as Meadowcreek, Westminster, Eagles Landing Christian and Woodward Academy were at the tournament. One other team showed up as well: Crisp County. They will be Panthers’ first opponent to begin the regular season on Friday, August 17. However, the Panthers didn’t play Crisp County in the tournament. 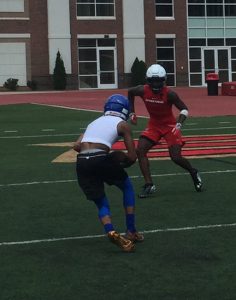 The team left early Thursday morning at 7 a.m. and drove straight to GAC. Their first opponent was Eagles Landing Christian Academy at 11 a.m. They were defeated soundly 28-6. “We got off the bus a little late because of traffic, but that’s no excuse,” Americus-Sumter Head Coach Larry Harold said. “We’ve got to be ready to play. We’ll have a little break here, and then we’ll come out and be ready to go.” Coach Harold made it clear that senior quarterback Kierston Harvey will be the starting quarterback when the Panthers face Crisp County in Cordele to open the season on Friday, August 17. “He’s the guy,” Harold said. “He’s going to take us as far as we can go. Our receivers have to be able to catch the ball. He’s putting it on them. We just have too many drops. Once we get that cleared up, we’ll be a pretty good football team.” Harold went on to say that several players are in the mix to start at wide receiver, such as Sam Crumbley, Quevolia and Kanova Willoughby and Hashim Haugabook just to name a few. “Our best receiver right now is Montrellis Wilson,” Harold said. “We really feel good about our receiving corps. We’ve got to get consistent and get our chemistry built for Kierston.” 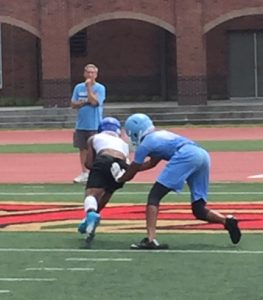 Americus-Sumter wide receiver Montrellis Wilson catches a touchdown pass against Meadowcreek. He caught several on the day for the Panthers.
Photo by Ken Gustafson

The tournament consisted of games being played simultaneously at both ends of the field. The teams had 50 yards to work with. There were no offensive lines. If was the quarterback and wide receivers on offense and the secondary on defense. After the loss to ELCA, the Panthers took on the Mustangs of Meadowcreek High School, located just up the road from GAC in Norcross. The Panthers bounced back and beat the Mustangs 26-2. Montrellis Wilson caught at least one touchdown in that game. After the slow start against ELCA, Kierston Harvey was pleased with how his team bounced back. “We started out pretty slow, but in the second game, we redeemed ourselves,” Harvey said. “We played Americus football. We capitalized on their mistakes. When they had a coverage bust, we took full advantage of it. We still need to work on knowing the plays throughout the whole game instead of having brain cramps here and there.” 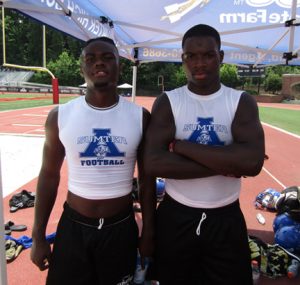 Henry Wilson (right) and his teammate, Bradley Perry Jr. (left) in the tent cooling off after one of the Panthers’ tournament games at GAC.
Photo by Ken Gustafson

Linebacker/defensive end Henry Wilson had an excellent tournament for the Panthers, including having an interception against Meadowcreek. “I didn’t play in the first game, but when I got into the second game, I did pretty good,” Wilson said. “They (Meadowcreek) didn’t have a chance to score. We got a turnover every time. We did pretty good.” Wilson went on to say that the summer workouts, overall, have been going well for him. “I’m getting stronger and really fast,” Wilson said. “I’m getting better on my technique. I’m ready to face visiting opponents.” However, the Panthers’ next opponent in the tournament was a tough team in Woodward Academy, a private school located near the Atlanta airport. The Panthers lost that game 30-14. After that game, Coach Harold expressed his displeasure with his team’s performance. “Let me tell you something. We are not going to lose another game in this tournament,” Harold told the team. “In a third-down situation, somebody has to make a play. That’s the difference between winning a championship and losing.” Raasaan Haralson, who just joined the ASH coaching staff as the secondary coach, also expressed his disappointment in the performance of the team. “I hate losing,” Haralson said. “You should hate losing. If I’m playing chess with my wife and I know I’m about to lose, I feel like throwing the board on the floor.” 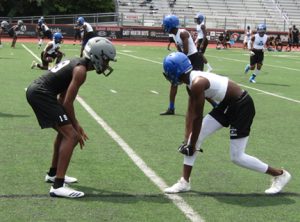 Clearly, Coach Harold and his staff communicated to the players loud and clear what the standard is at Americus-Sumter.

The team took the message to heart, as they responded in a positive way. They throttled another Metro Atlanta private school, Westminster, by the score of 38-2. ASH wide receiver Quevolia Willoughby said that for him, the GAC camp has been a great experience. “The camp has been great. We just have to improve on stuff like catching the ball and breaking on it,” Willoughby said. “Overall, we’re doing great right now.” By the time the Panthers had defeated Westminster, Willoughby had caught four touchdown passes in the tournament: one against Meadowcreek, two against Woodward Academy and one against Westminster. 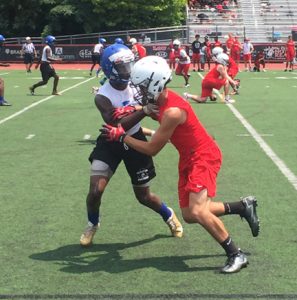 Up next for the Panthers was the host school: Greater Atlanta Christian. The Panthers needed to win this game if they wanted to go into the playoff phase of the tournament. If was a hard-fought defensive struggle, but Americus-Sumter prevailed, defeating the Spartans 12-10. Montrellis Wilson caught a key touchdown pass in that game. He caught several on the day.

That set up a rematch against Eagles Landing Christian, the team that beat the Panthers in their first game. Unfortunately for Americus-Sumter, the tournament ended for them as it started. ASH lost again to ELCA 29-12. The loss eliminated the Panthers from the tournament. 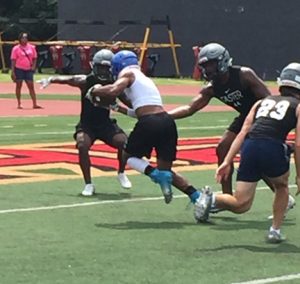 Coach Harold was disappointed in the way his team competed in that last game. “I want you to understand. I don’t care about seven-on-seven games. I’m concerned about the regular season,” Harold told the team after the second loss to ELCA. “I’m concerned about one thing: that we compete. I don’t feel we competed in that last game. That concerns me.”

The team headed back to Americus after they were eliminated. They will continue the remaining summer work-outs and will begin fall practice sometime in late July or early August. They will host a scrimmage game on Friday, August 10, against Northside-Warner Robins. They open the 2018 season against Crisp County in Cordele on Friday, August 17, at 7:30 p.m.