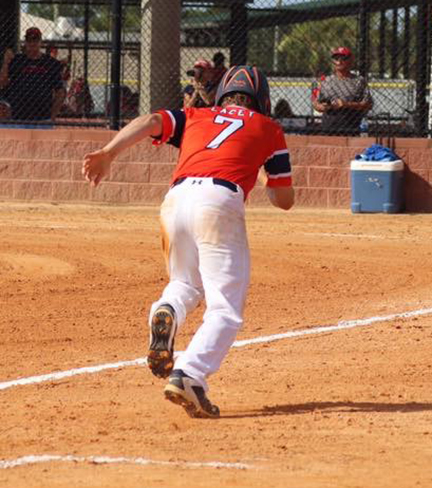 Gavin Lacy of the Americus Travelers scoring from third base. Submitted Photo

The festivities began on Monday, July 2, as all of the teams participating in the tournament marched in the Grand Slam World Series parade at Pier Park in Panama City Beach.

On Tuesday, July 3, the Americus Travelers went to work. They got off to a great start in pool play, going 2-0. They began pool play by defeating the Texas Patriots in Game 1 by the score of 8-0. Jaxson Haire was the winning pitcher. In Game 2, the Travelers defeated the Central Arkansas Slam by the score of 8-3. Caden King, Peyton Tompkins and Chase Ledger combined to pitch the game. On the day, the Travelers hit three home runs. Ledger, Tompkins and Chewy Lewis each belted the three home runs. 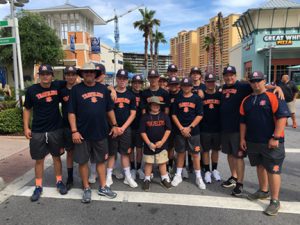 After the July 4 break, the Travelers went right back at it. Their success in pool play made them the #1 seed in the second round. On Thursday, July 5, The Travelers had a rematch with the eighth-seeded Central Arkansas Slam. The Slam had already defeated the ninth-seeded Texas Patriots 9-2 earlier in the day.

The Travelers defeated the Slam for the second time in the tournament by the score of 5-1. In that game, Cole Whatley was dominant on the mound, pitching a three-hitter.

On Friday, July 6, the Travelers took on another team from Arkansas: The Arkansas Showcase. The Travelers defeated the Showcase 6-5, putting them in the winners’ bracket. The Travelers took on the SWMO Twisters from Springfield, Missouri on Friday, July 6. The Twisters had already shut out the Dunwoody (GA) Diablos 7-0 earlier in the day. The game between the Travelers and the Twisters was a low-scoring affair. Unfortunately for the Travelers, they came out on the short end, losing 2-1. The loss sent the Americus Travelers into the losers’ bracket finals. They would face the North Georgia Raiders on the morning of July 7. Unfortunately for the Travelers, the Raiders had too much fire power and overwhelmed the Travelers 18-2. The loss eliminated the Travelers from the tournament. The North Georgia Raiders went on to defeat the SWMO Twisters twice, 9-4 and 8-1, to win the 2018 13u Grand Slam World Series.

In spite of being eliminated, the Americus Travelers had a tremendous showing, finishing in third place.