Frankie Raines grabs a rebound for the 11u Macon County Bulldogs. Photo by Ken Gustafson 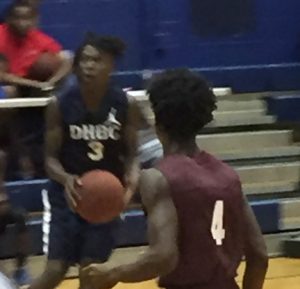 Jy’Kobie Brown of the 17u Jazz with the basketball guarded by Kanova Willoughby of the Cavaliers. Brown scored 19 against the Cavaliers.
Photo by Ken Gustafson 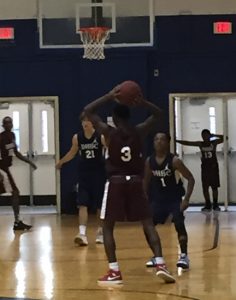 Quevolia Willoughby with the basketball for the 17u Cavaliers. Willoughby scored 16 in the overtime win over the Jazz.
Photo by Ken Gustafson

The second game of the night featured an 8u division tilt between the Warriors and the Macon County Bulldogs. The Warriors took a 3-0 lead to start the game as Camryn Watts scored and was fouled while shooting. Watts made his free throw to give the Warriors a 3-0 lead. However, that lead would not last long. Macon County went on a 9-0 run to take a 9-3 lead and led 13-7 by halftime. 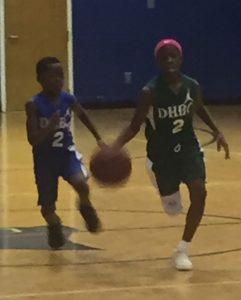 Corderian Leverett of the 11u Celtics dribbling the ball. Leverett scored eight points in the 40-19 win over the Warriors.
Photo by Ken Gustafson

The Bulldogs took control in the second half as they went on a 13-2 run to close out the game, winning 26-9. Lavoris Smith and Timothy Warren led the Bulldogs with eight points and Lamarrion Smith scored four. The 8u Warriors were led in scoring by Dometrius Monts with four points and Camryn Watts had three. Jarmaine Curry also hit two free throws for the Warriors.

The next game was an 11u division game between the Macon County Bulldogs and the Cavaliers. This one was a tough one for the Cavs. They played extremely hard and fought as hard as they could in this game. However, they were overwhelmed by the size and quickness of the Macon County team. Macon County jumped out to a 22-0 lead by halftime. They pressed the entire first half, forcing the Cavaliers into committing turnovers and converting those turnovers into points. The same thing continued in the second half. Macon County continued to full-court press the Cavaliers, forcing turnovers. The Bulldogs scored 23 unanswered points to broaden their lead to 45-0. Fortunately for the Cavaliers, with 2.7 seconds left in the game, Jaden Tatum was able to score a layup to avoid the shut out. The final score was 45-2. 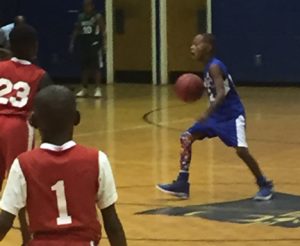 8u Warriors guard Camryn Watts with the ball. Watts scored three points in the Warriors’ loss to Macon County.
Photo by Ken Gustafson

The final game of the evening featured two athletic and highly-skilled teams in the 17u Cavaliers and the Jazz. This was a game that went back and forth the entire way, and it took overtime to decide the winner. With the score tied 72-72, Gabe Roland of the Jazz had a chance to give his team the win in regulation. However, his baseline jumper was short, and the game went into overtime. 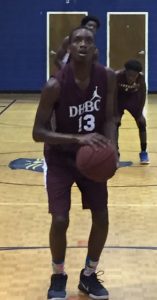 Jakontist Gordan of the 17u Cavaliers about to shoot a free throw. He led the Cavaliers with 24 points.
Photo by Ken Gustafson

Throughout this game, it was a back-and-forth affair, with the Jazz owning a 34-31 lead at halftime. Jordan Taylor led the Jazz with 12 points in the first half, including two three-pointers. Taylor would end up leading all scorers with 35 points. Quevolia Willoughby led the Cavaliers with eight first-half points. He would end up scoring 16 for the game. The second half was much like the first. The Cavaliers scored the first four points of the second half to take a 35-34 lead. However, the Jazz went on a 5-0 run to take a 39-35 lead, capped off by a basket by Jordan Taylor. Then the Cavaliers went on a short run of their own, outscoring the Jazz 9-2 to take a 44-41 lead. This was capped off by a three-pointer off the backboard by Jamarcus Deriso. The Cavaliers maintained the lead for most of the second half. They led 56-53 when they scored 11 unanswered points to take a 64-53 lead. However, the Jazz came back with an 8-0 run of their own, capped off by another three-pointer by Taylor. The Jazz continued to stay within striking distance of the Cavaliers as regulation was winding down. The Cavaliers were up 70-66 at one point, but the Jazz outscored the Cavaliers 4-2 to trail 72-70 with 9.6 seconds left in regulation. The Jazz had the ball and Taylor was fouled. He made both free throws to tie the game at 72-72. Both teams had a shot to get a winning basket in regulation, but were unable to. The game went into overtime and the Cavaliers were able to prevail in the extra period 77-74.

There are two more nights of regular-season play before the DHBC playoffs begin on Thursday, July 19. They will go through Saturday, July 21, the day that the championship games of all four age groups will be played.