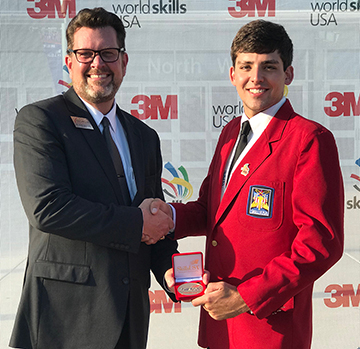 AMERICUS — South Georgia Technical College (SGTC) student Bailey Mills has proven himself to be the top aviation maintenance technology (AMT) student in the country after winning the gold medal at the national SkillsUSA competition in Louisville, Kentucky recently.
Mills was chosen to represent SGTC and the state of Georgia at the national competition after winning gold at the state-level competition. Similar to that competition, Mills and representatives from around the country were required to perform 12 tasks that represent the types of maintenance they will handle in the aircraft industry. The contest scope is consistent with the airframe and power plant mechanics certification guide, which is published by the Federal Aviation Administration (FAA) and is used as a teaching guide for AMT classes.
By winning, Mills became the first SGTC aviation student to be named a national champion by winning the gold medal. 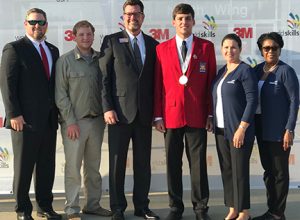 “I’m so proud to be the number one aircraft maintenance student in the country, but there is still a lot to learn,” Mills said in a Facebook post about his win.
SGTC President John Watford, Ed.D., was on hand at the medal ceremony to congratulate Mills and his instructor, Victoria Herron, on their accomplishment and tell them how much it means for the college.
“South Georgia Technical College has a rich aviation history. We believed we were one of the top aviation maintenance schools in the nation, but Bailey Mills and his instructors just proved that hypothesis,” President Watford said. “I am so thrilled for Bailey as well as for Victoria Herron and his other aviation maintenance instructors. This is a national championship in aviation maintenance for South Georgia Technical College. SkillsUSA is where the best of the best compete. Everyone competing is already a winner, but Bailey Mills was the number one student in the nation and now he has a gold medal to prove just how good his skills really are.”
In addition to Mills, two other SGTC students, Calvin Conley and Jacob Grant, qualified to compete at the national competition in the additive manufacturing category. Their instructor, Chad Brown (precision machining and manufacturing), had the opportunity to attend the conference with his top students and experience the event as well.
SkillsUSA is a partnership of students, teachers and industry working together to ensure America has a skilled workforce. The organization’s mission states that they empower its members to become world-class workers, leaders and responsible American citizens.
More than 18,000 students, teachers and education leaders attended the 54th annual SkillsUSA National Leadership and Skills Conference. Of those, more than 6,500 outstanding career and technical education students from around the country competed in skill-based competitions during the championship portion of the conference, which included competitions in 102 different trade, technical and leadership areas.
To learn more about the SkillsUSA organization on SGTC’s campus, contact Cynthia Carter as ccarter@southgatech.edu.