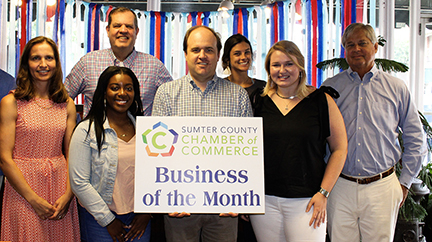 AMERICUS — For over 70 years, The Kinnebrew Company has been Americus’ primary source of fine southern clothing. Owned and operated by Hulme Kinnebrew III, the store has been a staple in downtown Americus for as long as most residents can remember.
The Kinnebrew Company began in 1947, when Kinnebrew’s father moved to Americus from Atlanta after World War II. While working at the Americus Times-Recorder, he realized the city’s need for another clothing store.
He decided to consult his grandfather, who owned a clothing store in Winder. After learning the ins and outs of his business, Kinnebrew’s father partnered with Walter Rylander to open the store that he would run for the rest of his life.
Kinnebrew III, known around the city as Mr. Kinnebrew, watched his father grow the store from the ground up. He was never sure of exactly what he wanted to do, but when he got married and needed a job, his father’s store seemed like the perfect place to work.
“I had total respect for my father’s work, and I never really considered doing anything else,” Kinnebrew said. “I just started and never stopped.”
After Kinnebrew’s father passed away in 1999, he bought the store from his mother and continued to run it the way his father would have wanted. He has considered opening a new branch in another city, but Americus has been so good to him that he said he has no desire to leave.
“I’ve been totally supported by Americus over the years, and of course I love the city,” Kinnebrew said. “I couldn’t imagine a better place to live, work and raise my family.”
Thankfully, the residents of the city feel a similar way about the business. Over the years, the store has outlasted the stores surrounding it, allowing The Kinnebrew Company to expand to over 7,000 square feet.
Through all the transitions, the store has seen dozens of employees come and go. Only one has been with Kinnebrew from his very first day — Linda Johnson, the bookkeeper for over 33 years.
Johnson moved to Americus in 1970, when her husband took a job with a local company. She applied to the store without knowing anyone there, but she said it didn’t take long for her to feel at home. Johnson was there when Kinnebrew took over the store, and has watched his children and grandchildren grow up.
“My favorite part about this store is the people,” Johnson said. “We’re like a family here.”
Johnson said she thinks The Kinnebrew Company is the best clothing store in Americus for one reason — the service. She said their employees are trained to treat everyone in the same way one would treat a visitor in their home.
“As soon as people walk in the door, we make sure to greet them and say hello,” Johnson said. “We’re friendly people.”
As friendly as the staff is, the store still struggles with competition, the primary competitor being internet sellers. Though many stores have caved under the pressure of keeping up, Kinnebrew said he believes the people of Americus appreciate the parts of shopping that can’t be found online.
“We’ve always had competition, whether it be outlet stores, big box stores or the internet,” Kinnebrew said. “But if you want to touch it, feel it and try it on, you need to come see us.”
Johnson agrees. She said The Kinnebrew Company owes its success to their customer-oriented mindset.
“We provide a service for anything you want, even alterations,” Johnson said. “We give each customer personal attention, and you won’t wait forever to be helped or checked out.”
As a self-described people person, Kinnebrew said his primary goal is to keep people happy. Even if a customer doesn’t buy anything, he said it’s worth the extra effort to make sure they feel comfortable walking in his store.
“A complemint means just as much as the money does,” Kinnebrew said. “I just want to know that I’ve done a good job and that I’ve made people feel good in the clothes they wear.”