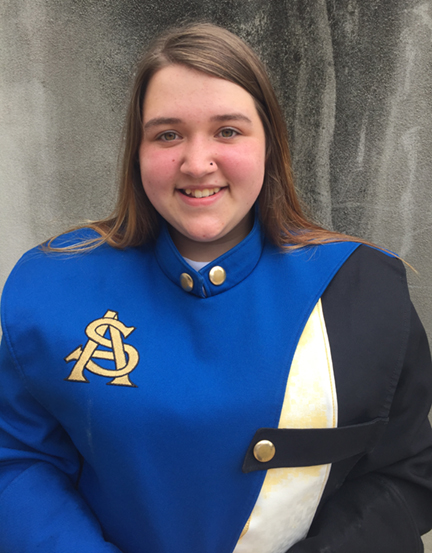 Americus-Sumter High School senior Nicole Ash will be the Drum Major for the ASH marching band this fall. Photo by Ken Gustafson

AMERICUS – Senior Nicole Ash has been involved in music almost all of her life. She has been in the Americus-Sumter High School Marching Band for the past three years. This year, her senior year, she embarks on a new challenge. She will lead the band as the new Drum Major.

“I’ve been playing the flute and the piccolo since ninth grade,” Ash said. “This year, I decided that I wanted to be Drum Major, so I auditioned.”

According to Ash, people filled out applications for the position, and it came down to three people. Of those three, Ash was chosen to be the Drum Major for the band.

There is a lot that goes into being a Drum Major of a marching band. There’s a lot of responsibility. “I’m the leader of the band basically,” Ash said. “When they’re playing on the field, I’m the one up there conducting. I just tell them basically where to play and how to play by the styles. Off the field, I just give them commands dealing with basic stuff and how they’re supposed to do it.”

Ash began playing a musical instrument in the fifth grade. She started out playing the flute. It caught on and she continued to grow in her passion for music. Now, in her senior year, she finds herself at the “top of the mountain”, so to speak: leading a high school marching band.

Ash credits Americus-Sumter Band Director Deborah Hughes for helping her succeed and helping her get to where she wants to be musically. “She (Hughes) has helped me over the years,” Ash said. “When we started practice, I was the one directing them in how to do it.”

Hughes is extremely excited about what Ash will bring to the table this fall as she leads the band during football games and band competitions. “We are extremely excited to have Nicole Ash as our Drum Major this year,” Hughes said. “She has been a vital part of our program for the past three years as a flute player and a section leader. Nicole exhibits all of the qualities that I look for in a Drum Major: great communication and listening skills, a positive attitude, good foundation in musical ability and talent, and most of all, a willingness to serve and help others.” Hughes went on to say that Ash is dedicated to helping all of the members of the band and desires to make the Americus-Sumter Marching Band the best. “I am looking forward to seeing her lead our band this fall and I know she will do an outstanding job,” Hughes said.

With the exception of parents who have children playing in the marching band, most of the fans who show up at Alton Shell Stadium this fall will be there primarily to see the Panthers play football. One should remember, however, that the drive and dedication that it takes to master the skills of football will also be shown on display at halftime. Drum Major Nicole Ash will lead the marching band on to the field to put on a display of musical talent, coupled with synchronized marching maneuvers that have been tirelessly rehearsed over and over again. Panther fans at halftime will see Nicole Ash on the podium, orchestrating every maneuver and helping the band to perform at its very best.