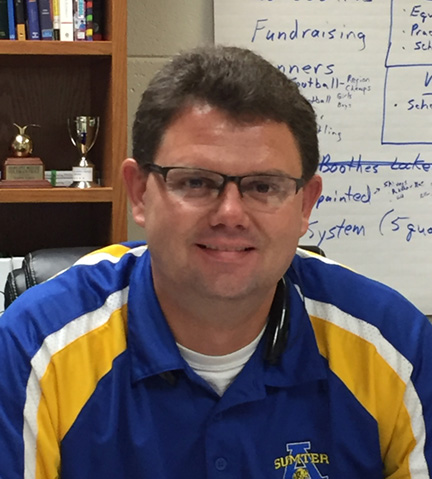 Americus-Sumter HS Athletic Director Coleman Price will be taking over the ASH girls’ softball program in 2018. Photo by Ken Gustafson

AMERICUS – It’s a new year for the Americus-Sumter girls’ softball program. ASH Athletic Director Coleman Price is taking over for Preston Shackelford, who coached both softball and baseball. Shackelford has left Americus-Sumter, and Coach Price is ready to coach a young team with a lot of potential this year. The team struggled in 2017, but for Coach Price, it’s a new year and a clean slate. “I’ll be taking over the softball program for the 2018 season,” Price said. “They (the 2017 team) were a young team and struggled throughout the season. They were in a tough region. We’re still in the same tough region.” 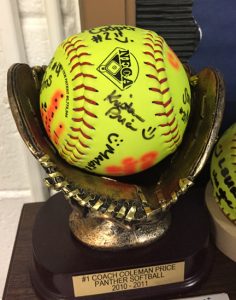 The Coach’s Award given to Coach Coleman Price by his team. Price coached the Lady Panthers Softball Team back in 2010. The names on the ball are the names of his players.
Photo by Ken Gustafson

But that was last year. This a new year and a new season. Coach Price is taking over a team with returning veterans. However, there will be some players coming up from the middle school ranks as well. “Off of last year’s team, we only lost three players. We return the majority of the players and we will rebuild with some younger players coming up from the middle school program,” Price said.

The team returns three seniors. One of these seniors is pitcher Taylor Garcia. Coach Price is counting on her heavily this year to use her experience to help lead the team. “We’re looking for some big things out of Taylor this year. She will be taking on a big load of the pitching as we move through the course of the year. She’s a senior and she’s got the expectations of carrying the team this year,” Price said. “She actually did all of the pitching for almost all the games last year. This year, we’ll have some additional help because we bulked up our schedule a little bit.”

According to Price, in 2017, the Lady Panthers played about 14 games. Coach Price is increasing the schedule this year by almost 10 games, so the Lady Panthers will be playing close to 24 games. That will give them more experience in competition. “We are going to play a lot more double-headers and we’ll be playing during the week: Monday through Thursday,” Price said. One reason Price is doing this is because it’s hard to find tournaments around this area, unlike places like Metro Atlanta. “We’re not having to travel up to the Metro Atlanta area,” Price said. “Because of budget restraints, we’re going to keep it local between our region and local-area teams,” Price said. Price will be looking for veteran leadership this year. He’ll be looking for junior shortstop DeAsia Ford to be a big contributor. Ford is also a key contributor on the Lady Panthers’ basketball team.

“Ford played shortstop for the team last year,” Price said. “She’s one of our big returners. There are high expectations for her as a junior coming into this season,”. Another returning veteran Price will be counting on for production and leadership is junior outfielder Brianna Pope. Pope is also a key contributor on the Lady Panthers’ basketball team. “We are looking for her to have a big year at the plate,” Price said. “We’re looking for her to drive in some runs for us in big situations.” Coach Price went on to say that he is starting from ground zero with the team with the expectations that each player will improve each and every day. The atmosphere that Coach Price wants each and every day during practice and in games is an atmosphere of constant competition without complacency. “We will be in the process of making sure players are competing and trying out for their positions every day,” Price said. “There’s not a set person playing any set position at any time. We will have tryouts every single day. That’s my philosophy on things. You earn your opportunity and your time to play. That’s the way I go about it every single day. The players who get to the point where they win those positions will keep those positions. Hitting and fielding takes that into account.” Coach Price went on to say that he told his players on day one that they are trying out for positions every single day.

Taylor Garcia is expected to do the bulk of the pitching because she is a senior and has the experience, but according to Price, since this year’s schedule has been increased, sophomore Trinity Oneal will be counted on for production on the mound. “We are leaning on Trinity to take on a big load of that pitching,” Price said. “That way, Taylor can be fresh as we get into playoff time towards the end of the season.”

According to Price, the 2017 team was building from scratch and that is what he will be doing this year. “We have a group of young ladies coming up from middle school that will be very young, but young is good,” Price said. “They have a chance to build upon their skills and be able to build for the future.”

According to Price, the Lady Panthers will play Monday through Thursday every day for about six-straight weeks. As far as non-region opponents, the Lady Panthers will be playing Monroe (Albany), Kendrick out of Columbus and Pataula Charter Academy from Edison, GA. “We’ll actually travel over to Cuthbert and play Pataula at Andrew Junior College under the lights. That’s where they play their home games,” Price said. “That will give our girls some college exposure and the opportunity to be seen by college coaches.”

The Lady Panthers’ first game will be a home opener against Dooly County on Monday, August 20, at 5:30 p.m.