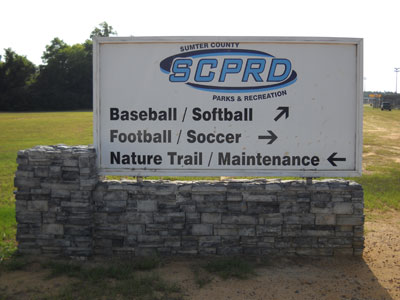 AMERICUS – It may not feel like it, but fall is coming. The Sumter County Parks and Recreation Department (SCPRD) began registration for football, soccer, cheerleading and recreational gymnastics on Monday, July 16 and it will continue until Friday, August 10. This is for kids ages 5-12.

According to SCPRD Director Tim Estes, the cost to participate in any of these sports is $65.  Estes expects over 500 kids to be involved between football, soccer and cheerleading. “Our youth football program is usually in the 250-participant range ages 5-12,” Estes said. “Soccer is usually at about the 150-participant range and then about 100 cheerleaders.”

Estes went on to say that for youth gymnastics classes, they usually run between 120 and 140, with ages ranging from 18 months into the teenage years.

According to Estes, the number of teams competing at each age level depends on the age group itself. “In football, what we like to do for ages 5 and 6, since they play with fewer kids on the field, we usually put 10 or 11 on each team. We’ll have four or five teams in that 5 and 6-year-old age group,” Estes said. “In the 7-8, 9-10 and 11-12 age groups, the tackle leagues, we usually try to put 18-22 on the team so we’ll have maybe three or four teams, depending on the number that register. In the 11-12 age group, we’re usually smaller than that. We usually have two teams in that age group.” Estes went on to explain that by the time a kid reaches age 12, he is eligible to play middle school football and some of them will choose to play for their middle school.

According to Estes, in the past, a player wasn’t allowed by the Georgia Parks and Recreation Association (GPRA) to play both middle school ball and recreation ball. However, a couple of years ago, that changed. “Now, if they choose to and they can make it happen, as far as getting their schedule worked out, they can play both of those,” Estes said.

As far as soccer is concerned, the 5-6 age group and the 7-9-year-old age group, or U10, play six-on-six. For that reason, Estes said that they try not to put more than 10 kids on a team. “We try to make it where everybody gets plenty of playing time,” Estes said. “At the U13 age group, which is your 10, 11 and 12-year-olds, we may put a few more, maybe 11 or 12 on a team because they play eight-on-eight.” According to Estes, most of the soccer teams are named after Major League Soccer (MLS) teams.

Estes went on to say that for cheerleaders, they like to wait and see what they have when registration is over. “We try to pair sisters up,” Estes said. “Maybe they have a brother that’s playing football so we make sure that the sister is cheering for the team that her brother plays for. We don’t necessarily go by age group in cheerleading as much as we do just trying to pair people up.”

According to Estes, the fall sports season will begin a week after Labor Day. It will go through the month of September and most of the month of October. “We try to get done by October 27,” Estes said. “After the regular season is over, we will select All-Star teams and they will go play in the GPRA district tournaments.”  As far as registration for gymnastics, that is for gymnastics recreation classes for kids ranging from 18 months to the teenage years, not to get on the competitive gymnastics team. “She (Melissa Singley) has already had tryouts for the competitive team. They know who they are,” Estes said. “We have recreation-level classes where the kids learn all the skills that it takes to be on that team. We do that year-round.”

Estes went on to say that the soccer, football and cheerleading programs are in need of volunteer coaches.

Again, registration for football, soccer, cheerleading and recreational gymnastics classes began Monday, July 16 and will go through Friday, August 10. For parents who want to register their kids, they should register on line at www.scprd.org or on-site at The Columns at Boone Park Community Center Monday through Friday, 8 a.m. to 6 p.m.