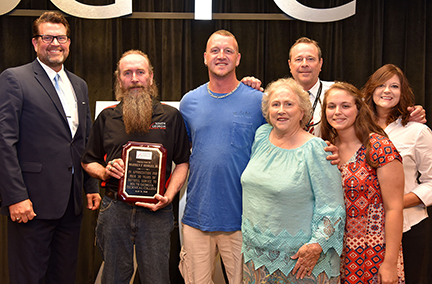 AMERICUS — For 30 years, Warren Hodges Jr., has diligently worked to keep South Georgia Technical College’s (SGTC) campus something that the students, faculty, staff, and community could be proud of. He decided it was time to retire and let someone else share that responsibility, but not before a large number of faculty, staff, and family members gathered to thank him for his service and wish him well in retirement.
“Our campus has a wonderful appearance and one of the first things that I hear from visitors when they see the Americus campus is how beautiful the grounds are maintained,” said SGTC President John Watford, Ed.D., at the retirement reception held for Hodges in the John M. Pope Industrial Technology Center on the Americus campus recently.
“Warren has had a lot to do with the appearance of this campus for the past 30 years and I may be a little prejudiced, but I think we have one of the most if not the most beautiful campus of any college in the state,” said Watford. “Warren has always taken pride in his job duties and it shows. We will certainly miss him.”
Hodges first came to South Georgia Tech in 1976, to study automotive mechanics. He finished that program and went to work. He returned to the campus in September 1986, and began his career as a utility worker. He stayed less than a year and resigned. But in April 1989, he returned as a groundskeeper/maintenance worker and from 1989 through June 1, 2018, he made sure that the SGTC campus looked its best.
When Watford thanked Hodges and presented him with a plaque and a card signed by faculty and staff, Hodges said, “You are certainly welcome. It was my pleasure and I plan to come back and check on everything to make sure it is still looking good.” The plaque included the SGTC logo with the words, “Presented to Warren F. Hodges Jr., in appreciation for your 30 years of faithful serve to South Georgia Technical College, May 31, 2018.
In addition to the comments by Watford, Don Smith, assistant to the president who oversees the facilities, said, “The whole facilities have changed in the 30 years that you have been here. You had to love South Georgia Tech to do what you have done to make and keep this campus beautiful for all those years.”
Jeff Wiseman, director of Maintenance at the college, was Hodges’ immediate supervisor. “The first time I met Warren, he told me he kept the grounds up and that he cut all the grass. I didn’t think much about that until Warren took two weeks off in the middle of the summer and I had to help cut all the grass. I had a new respect for Warren,” laughed Wiseman. “Over the years, the campus got bigger and Warren began to supervise the inmates over the last 15 years to help maintain the campus. I can truly say that Warren has a great work ethic and I am proud to call him my friend and coworker.”
Glen Cobb, air conditioning technology instructor on the Americus campus, started as a maintenance technician. He echoed Wiseman’s comments and said it was a pleasure to work with Hodges and that he would be missed.
SGTC Marketing Instructor Mary Cross told about what a compassionate person Hodges was and how he performed acts of kindness for faculty, staff and students. “He is a wonderful employee and person,” said Cross.
Hodges is the son of Sue Statham who was in attendance at the reception along with his son Chad Hodges of Americus and his daughter Tiffany Hodges. Warren Hodges III, his other son, could not attend. John and Becky Statham, Warren’s brother and sister-in-law also attended. John is a retired lieutenant colonel for the U.S. Air Force and Becky is the daughter of Thomas Munn, who retired as an aviation instructor at South Georgia Tech.