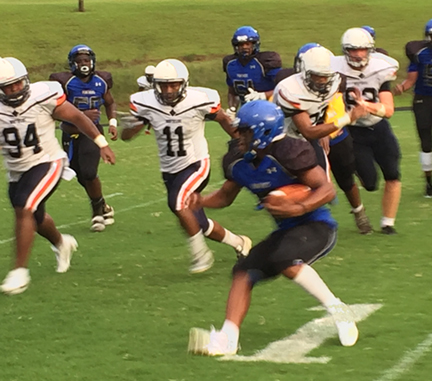 AMERICUS – It was the final time before the regular season started to get things right. The Americus-Sumter football team had a scrimmage game Friday night, August 10, at Alton Shell Stadium against Northside Warner Robins. This would be the final time that Coach Larry Harold and his Panthers could work out any problems in game-like conditions before it begins for real in Cordele against Crisp County next Friday night. Unfortunately, the Panthers were unable to execute on offense for most of the night and lost the scrimmage game 34-9. Technically, the varsity score was 27-9, being that the JV players of both teams played in the fourth quarter, and both coaches decided not to keep score during the JV part of the game.

“This was a game of attrition,” ASH Head Coach Larry Harold said. “Northside is a Class AAAAAA program with 125-plus kids and we have 75 kids. I thought my kids played hard. We just got wore down up front. We knew going into this game that it was going to be tough on our young kids. Our offensive and defensive lines battled. We’ve got to be able to sustain the second half.” Harold went on to say that Northside Warner Robins rotated fresh bodies in the second half, while his club still had the same players playing. “I feel good about how hard we’ve worked,” Harold said. “This was just a scrimmage game. We’ve got to get ready for next Friday night against Crisp County in Cordele.” 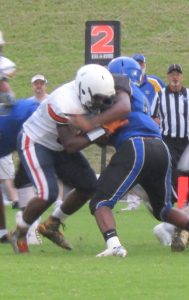 The Panthers won the toss but elected to go on defense. Neither team could move the ball on offense on their first possessions. On their next possession, the Eagles moved the ball down into Panther territory. A face mask penalty against the Panthers advanced the ball down the ASH eight-yard line. Running back Donovan Delgado ran the ball in for a touchdown. The extra point was good and Northside Warner Robins took an early 7-0 lead. However, the Panthers struck back when quarterback Kierston Harvey threw a 70-yard touchdown pass to Quevoluia Willloughby. Kevin Abarca’s extra point was no good, but the Eagles’ lead had been cut to 7-6.

Northside Warner Robins struck back when quarterback Jadin Daniels ran a quarterback keeper 60 yards for a touchdown. The extra point was good and the Eagles extended their lead to 14-6.

Harvey got the ASH offense moving again on the Panthers’ next possession. Harvey threw a long pass to Montrellis Wilson down to the Eagles’ 25-yard line. Wilson then ran the ball down inside the 20. Unfortunately, the Panthers would have to settle for a Kevin Abarca field goal to make the score 14-9 Northside Warner Robins. 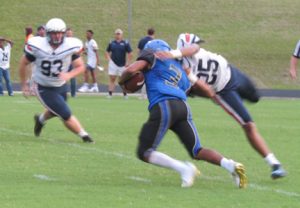 On the Eagles next drive, they moved the ball down into Panther territory, but had to settle for a Cory Munson field goal to make it 17-9. The Eagles later moved the ball down into Americus-Sumter territory once again, but the Panther defense forced them into another field goal attempt. Munson’s 38-yard attempt was no good, and both teams went into halftime with Northside Warner Robins leading 17-9.

The Panthers got the ball to start the second half, but the offense bogged down as Harvey was sacked for a loss on third down. Neither team could mount a drive on offense for much of the third quarter. With a little over six minutes to go, the Eagles had the ball at the Panthers’ 24. Backup quarterback Willie Northern was sacked for a loss by ASH linebacker Henry Wilson. The Panthers held Northside Warner Robins to another field goal, giving the Eagles a 20-9 lead.

Americus-Sumter was unable to mount a drive on their next possession, and the Eagles got the ball at their own 48-yard line. They steadily moved the ball all the way down to the ASH eight-yard line. From there, Willie Northern scored on a quarterback keeper. The extra point was good and the Panthers trailed 27-9. 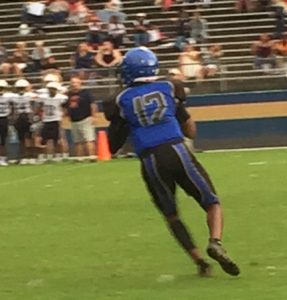 : Kierston Harvey back to throw looking for a receiver.
Photo by Ken Gustafson

However, the Panthers showed some life on offense as Harvey threw an eight-yard pass to Montrellis Wilson, who ran the ball deep into the Eagles’ territory. In the last few seconds of the third quarter, Harvey threw two passes into the end zone: one two Quevoluia Willoughby and one to Sam Crumbley, but neither connected for a touchdown. At the end of the third quarter, The Panthers trailed Northside Warner Robins 27-9.

During the fourth quarter, both coaches decided to play their JV players. Both coaches decided not to keep score with the JV part of the scrimmage. However, the Panther JV offense showed some life as they moved the ball down to the Eagles’ 17-yard line. Unfortunately, the offense bogged down at the 20-yard line. The Panthers tried a 37-yard field goal, but Kevin Abarca’s attempt was short. 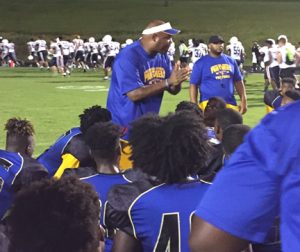 “We’ve got to get better up front. That’s what it came down to,” Harold told his team after the game. Harold went on to tell his guys to get in the weight room this coming week and get ready for Crisp County. Next Friday night in Cordele, it will count. The Panthers will take on Crisp County in Coach Harold’s first regular-season game as head coach of the Panthers. Kickoff is set for 7:30 p.m.