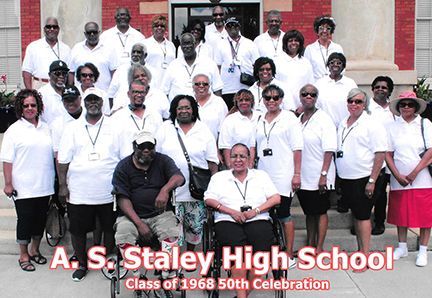 AMERICUS — 1968 — what a year! Dr. Christian Barnard performs the first successful heart transplant. U.S. Sen. Robert Kennedy, and Civil Rights leader the Rev. Dr. Martin Luther King Jr. are assassinated, prompting President Lyndon Johnson to sign the Civil Rights Act of that year. Popular movies were The Graduate, Guess Who’s Coming to Dinner, and Rosemary’s Baby. The Rolling Stones, the Supremes, and the Beatles were at the top of their game. Gas was 34 cents a gallon and the minimum wage was $1.60 an hour. For $14,950 you could buy a new house and $2,822 could get you a new car! The Black Power salute was seen for the first time on television at the 1968 Summer Olympic Games in Mexico City, and race riots and demonstrations against the Viet Nam War were taking place in major cities all across the U.S.
But most importantly, on Friday, May 31, 1968, 62 smart, eager and enthusiastic students graduated from A.S. Staley High School, the last segregated high school class in the Americus School System.
That event was celebrated by 71 classmates and guests at the 50-year Class Reunion of the Class of ’68 — “Reunited and It Feels So Good!” The events started with a meet and greet at Rees Park on Friday, July 6, 2018, a bus tour of Americus, a banquet at Rees Park on Saturday evening, and services at Friendship Missionary Baptist Church, Americus and luncheon in Albany on Sunday.
The weekend festivities were coordinated by the Planning Committee: Rufus Thomas (chair), Gloria J. Simpson (administrative assistant), Bettye J. Shelton, secretary/treasurer, Rosa Tyson-Sims, treasurer, and members-at-large, Dorothy Crenshaw Perkins, Earnestine Sims-Josey and Ordella Zanders-Westbrooks. Music was provided by The Classic Soul Band featuring Lady K, and deejay Travis Tyson. Photographer Ray Harris captured the moments in film. Caterer Ann Knighten provided the lovely meal; Surlenia Bryant the imaginative table center pieces and decorations. Tom and Juliette Jordan, and Emily and Kris Simpson acted as hosts.
The class lovingly paid tribute to three faculty members in attendance, Eloise Paschal, teacher; Charlie Mae Lemmons, PE instructor, and Delphine McGrady, widow of teacher Clyde McGrady.
The fellowship, remembrances and love were overflowing. There was a memorial tribute to 29 members of the class who have passed away. A poignant moment was a special ceremony welcoming to the class of ’68 Wilma Wiley-Cooke, Marilyn Smith, Joanne Thomas-Wilson and the late Daniel DeLoatch Jr., represented by his sister Carolyn DeLoatch, in recognition of their efforts to desegregate Americus High. It was a tremendous sacrifice, but “they resisted and persevered.” Also receiving special recognition was Gloria Simpson, the heart and soul of the committee, who not only was the most active fundraiser, but was lauded for her efforts in making the reunion a success.
Although many of the celebrants were local from throughout Georgia, guests came from as far away as Houston, Texas, Florida, Maryland, Michigan, Connecticut, New Jersey, and Alabama. One married couple who remain together was high school sweethearts Kirby and Lucille Ragins.
One of the shining moments was the reading of the list of Superlatives, many of whom were in attendance, including Miss Staley, Dorothy Perkins Crenshaw; Miss Homecoming, Lucy Lundy-Prince, and Homecoming Attendant, Cora Butts; Most Humorous, Elizabeth Jones; Best Dressed, Lucille Gaines; Most Businesslike, Rufus Thomas; Most Likely to Succeed, Mary Wilson; Most Popular, Bettye Shelton and Billy Leroy Terry; Most Athletic, Bettye Shelton and Eugene Petty; and Best All Around, Eugene Petty. Most Dependable was represented by Cora Butts and Jessie Austin; Most Artistic was Larry Floyd and Most Studious was represented by Ordella Zanders-Westbrooks and Rufus Thomas; Most Cooperative, Ozie Pope-Jackson and Alonzo Houser. It was obvious that had the elections taken place today, the same people would have been elected!
Americus Mayor Barry Blount provided a proclamation to the class celebrating their accomplishments, and at the end of the festivities guests laughingly remarked, “See you at the next 50th!”