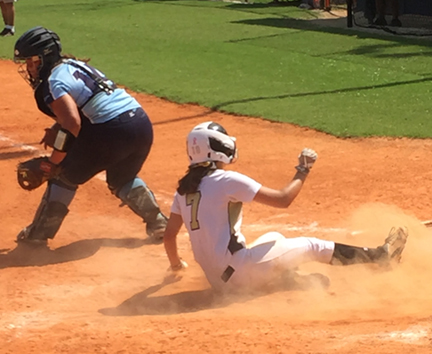 AMERICUS – The Southland Lady Raiders softball team was hoping to bounce back against Robert Toombs Christian Academy after losing 11-6 earlier in the day to Southwest Georgia Academy in the round robin day of play held Saturday, August 11, at the Georgia Southwestern State University softball complex.

Unfortunately, the Lady Crusaders scored eight runs on seven hits in the bottom of the first inning on their way to an 11-1 victory over Southland. They also took advantage of two errors by the Lady Raiders.

Southland batted first, hoping to put some runs on the board right away. Things started off well when Alli Dent led off the game with a single and reached second on a fielder’s choice by Holly McCain. However, Sara Beth Storey flew out and Brookland Weaver struck out to end the threat.

This gave Robert Toombs the opportunity to strike first and strike hard, and they did exactly that.

Bailey Holland reached on an error, followed by a single by Ellie Graham, advancing Holland to third. Graham then advanced to second base on a passed ball. This was followed by an RBI-single by Kayla Blackshear. From then on, the Lady Crusaders proceeded to score seven more runs on six more hits and were aided by two Southland errors in the inning. 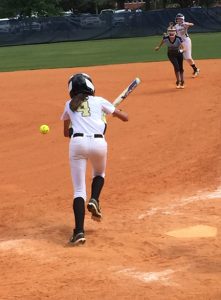 Morgan Minick tries to bunt her way on.
Photo by Ken Gustafson

That seemed to take the wind out of the sails of the Lady Raiders, though they tried to respond in the top of the second.  Reese Roland was hit by a pitch, putting the lead-off batter on for Southland. Katie Rogers then reached on an error by Robert Toombs starting pitcher Tanner Wright. This allowed Roland to score, giving Southland their first run of the game. Unfortunately for the Lady Raiders, that would be their only run of the game. The Lady Raiders were only able to manage three more hits for a total of four for the game.

In the top of the third inning, it looked as if Southland would have a big inning and be able to get themselves back in the game. Storey led off with a double, followed by Brookland Weaver drawing a walk. The Lady Raiders had runners at first and second with nobody out. However, Roland and Rogers both struck out, and Morgan Minick hit into a fielder’s choice to end the inning.

The Lady Crusaders scored three more insurance runs in the bottom of the third inning to seal their victory.

“We tried to come back and work our way back, but things just didn’t go our way,” Southland head coach Rusty Tondee said. Tondee told his team after that game that there is nothing they can do to change the past, and that they have to move on and get ready for Terrell Academy on Tuesday. Southland (3-4) will be hosting Terrell Academy on Tuesday, August 14. First pitch is scheduled for 4:30 p.m.