Charlie Smith: 60 years on the job and still going strong 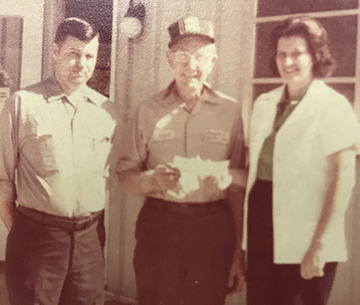 James Ethridge, at center, is flanked by Charlie and Faye Smith, to whom he sold the business in 1981.

AMERICUS — In July 1958, James Ethridge, owner of Carburetor & Ignition Service — a business he began in 1947 — needed someone to wash parts and clean up. Charlie Smith’s uncle, James Law, was an employee of Ethridge at that time and told his employer about his nephew. He knew he would work. So, Ethridge hired Charlie Smith at age of 15. He had to get a worker’s permit for the young man to begin working at such an early age.
At that time, Carburetor & Ignition Service was doing a large amount of work on lawn mowers and chain saws, which Smith eventually learned. Later, he became the only employee of Carburetor & Ignition Service. As lawn mower and chain saw work began to drop off, Ethridge, who specialized in tune-up and carburetor work on vehicles, began to teach Smith these skills. Ethridge would attend carburetor schools to learn about carburetors. Later after the shop would close for the day, he would use his carburetor photographs and diagrams to teach Smith about carburetors.
Although Smith was only 15 years old when Ethridge, hired him, Ethridge would not allow Smith to quit school. After school, the bus driver would let Smith get off at Carburetor & Ignition Service and Smith would work until closing time each day. At that time Carburetor & Ignition Service was on Forsyth Street.
Ethridge also had a diesel injection pump stand and he taught Smith how to work on the diesel pumps. He would send Smith to school to learn the workings of a diesel pump and as new models came out. Smith attended schools in Atlanta, and in Orlando, Fla.
Later, Ethridge purchased the land at 921 McGarrah St. to build the shop building. In April 1970, Carburetor & Ignition Service moved to its present address.
In 1981, Ethridge decided to retire and sold the business to Charlie Smith and his wife, Faye. So, on May 1, 1981, the Smiths became new owners of Carburetor & Ignition Service.
James and Eva Ethridge were good to Smith and family throughout the 23 years that Smith worked for them and he gave Smith a chance to own his own business.
Later, as things began to change on vehicles, fuel-Injection replaced carburetors. Smith decided to stop doing tune-ups on vehicles. Now he works on alternators, starters, and diesel injection pumps and carburetors, too, that are brought in off of farm equipment and vehicles. Word has spread and now he still enjoys work from all around.
Even though Charles Smith is past retirement age, he still enjoys working and helping people. Without the goodness of the Ethridges, he couldn’t have made it.
Smith grew up in the Thalean Community on the Dawson Road, attended Thalean School, and Americus High School where he graduated in 1961.
These 60 years at Carburetor & Ignition Service has been a learning experience and the Smiths feel that God has truly blessed them with good customers and good health.