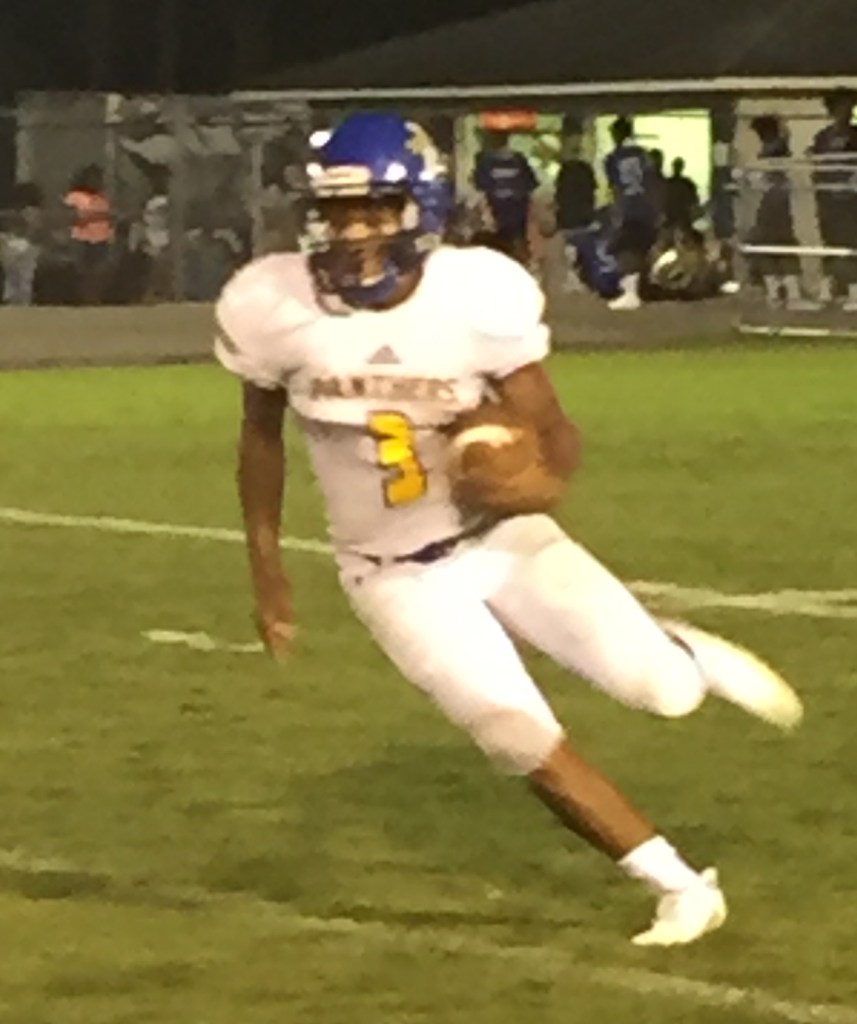 CORDELE – Friday night, August 17, was the dawning of a new era for Americus-Sumter High School Football as first-year coach Larry Harold led his Panthers across Lake Blackshear and into Cordele to take on the Cougars of Crisp County. It was a defensive struggle for most of the game. The game turned out to be a classic that went into two overtimes. However, with Crisp County leading 17-14 after one overtime, it came down to fourth down for Americus-Sumter. Freshman kicker Kevin Abarca attempted to tie the game and send it to another overtime, but Abarca’s kick was wide-left, and Americus-Sumter lost 17-14 in Coach Harold’s debut as the Panthers’ head coach.

The Panthers won the toss and elected to receive. However, on the kickoff, Montrellis Wilson was running with the ball when he fumbled. The ball was recovered by the Cougars. However, Crisp County committed an illegal procedure penalty on offense, and the Panthers got a big sack for a loss, forcing Crisp County to punt. Americus-Sumter had the ball around their own 12-yard line. Running Back Christian Wayman carried the ball five yards. Then on the next play, quarterback Kierston Harvey threw a 34-yard pass to Quevoluia Willoughby down to the Crisp County 49. The Panthers moved the ball down to the Cougars 16-yard line. Then Harvey found Willoughby in the end zone for a 16-yard touchdown. Kevin Abarca’s extra point was good and the Panthers had a 7-0 lead with 8:15 to go in the first quarter.

Crisp County struck back, however. Quarterback AJ Lofton gained massive yardage on two quarterback keepers. The second one moved the ball down to the Panthers six-yard line. Crisp County running back Marquez Palmer scored and the extra point by Connor Richmond was good, tying the game at 7-7 with 40.3 seconds left in the first quarter. 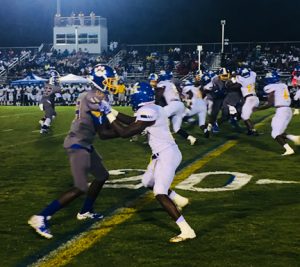 The Cougars would later capitalize on an Americus-Sumter turnover. Kierston Harvey’s pass was intercepted by Jayren Fox. The Cougars moved the ball all the way down inside the ASH five-yard line thanks to the elusive feet of their quarterback, AJ Lofton. Palmer scored his second touchdown to give the Cougars a 14-7 lead.

On the Panthers’ next offensive possession, Harvey threw a pass to Sam Crumbley, who nearly broke away for a long run for a touchdown. However, the Panthers were unable to mount a drive and were forced to punt. Crisp County moved the ball down inside ASH territory again. Lofton threw a long touchdown pass to Harold Bell, who had been battling ASH defensive back Bradley Perry for the ball. However, Bell was called for offensive pass interference. Both teams went into halftime with Crisp County leading 14-7.

Crisp County had the ball in the second half, but they turned the ball over on a high snap over Lofton’s head. Chase Jones recovered the fumble for Americus-Sumter, and the Panthers moved the ball down to the Crisp County one-yard line. Harvey then scored on a quarterback sneak. The extra point by Abarca was good and the game was tied 14-14 with 6:01 left in the third. 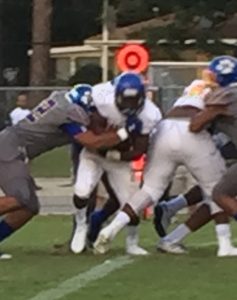 ASH running back Christian Wayman running with the ball against Crisp County.
Photo by Ken Gustafson

The Panthers held the Cougars on their next possession. Then Americus-Sumter moved the ball down into Cougar territory. The Panthers had the ball on the Crisp County 22-yard line and it was third down and four to go. Coach Larry Harold called time out to set up the plan to get the first down.  Out of the time out, the Panthers were called for illegal procedure, which made it third down and nine from the Cougar 27. The Panthers were unable to get the first down, and the third quarter ended with the score tied at 14-14. The Panthers gained three yards on the third-down play. They decided to go for it on fourth and six from the Crisp County 26. They failed to make the yardage and the ball was turned over on downs. The Cougars made a big 15-yard play when Lofton threw a 15-yard completion to Romel Shiloh near midfield. The Panthers were able to force the Cougars into third-and-three, but Lofton made the necessary yardage on a quarterback keeper.

By this time, there were a little over nine minutes left in the game. The Panthers were able to halt the offensive drive of the Cougars, forcing them to punt. However, Crisp County punter Bailey Barfield was able to punt the Panthers inside their own five-yard line. The Panthers were forced into a third-and-eight situation, but Harvey completed a pass to Sam Crumbley for the necessary yardage for a first down. ASH was forced into a third-and-five situation, but the Panthers were able to gain the necessary yardage to get another first down and keep the drive alive. Harvey then completed a short pass to Montrellis Wilson, but a holding call negated the play. 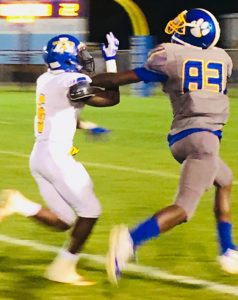 The Panthers had the ball at the Crisp County 44-yard line and it was first-and-15. Harvey nearly connected with a wide-opened Hashim Haugabook for what would have been a touchdown, but the ball was overthrown. Harvey tried another long pass on second-and-15, but it was overthrown. This brought up third down and 15. They were able to gain seven yards on the play.This brought up fourth and eight on the Cougars 44. The Panthers decided to punt. The Cougars had the ball deep in their own territory. Lofton threw a long pass that was incomplete, but pass interference was called on the Panthers. The ball was moved up from the Cougars 12 to their own 27. Lofton threw a short pass that was complete to Anthony Lewis for a five-yard gain. Crisp County called a time out. Out of the time out, the Cougars had 19.1 seconds to go to win the game.  Crisp County Head Coach Brad Harber decided to let the clock run out and play for overtime.

The Cougars won the toss and deferred to Americus-Sumter, so the Panthers got the ball first at the Crisp County 15-yard line. Harvey rolled to his right and threw the ball into the end zone, but it was intercepted in the end zone by Damien Cross of the Cougars. On the Cougars first play from scrimmage at the 15, Lofton kept the ball on a quarterback keeper, but gained no yardage. On second down, Lofton dropped back to pass and was sacked for a huge loss back to the 26-yard line. On third down, the Cougars decided to run the ball, but the Panthers’ defense pushed the Cougars back for another loss. It was now fourth-and-20 for Crisp County at the ASH 29. The Cougars elected to kick a 47-yard field goal. However, Connor Richmond’s attempt was short. The game would go to a second overtime. In high school, the ball is placed at the 15-yard line during overtime periods. Crisp County got the ball to start the second overtime. Lofton took a high snap from his center and that forced the Cougars back 10 yards. Crisp County had the ball with third and 13 to go. Lofton ran to his right on a quarterback keeper and was run out of bounds at the six-yard line. The Cougars decided to kick a field goal. This time, Connor Richmond delivered on a short field goal to give the Cougars a 17-14 lead.  Now, it was the Panthers turn to answer. On first and 10 from the Cougars 15, the Panthers got three yards on a running play from Montrellis Wilson. On the next play, Wilson ran the ball down to the six-yard line. However, on the next play, Wilson was stuffed at the line. It came down to a short field goal by Kevin Abarca. However, Abarca’s kick was no good, and the Panthers lost a heartbreaking game in double-overtime, 17-14.

Americus-Sumter will try to bounce back when they play their home opener against Dougherty next Friday night, August 24. Kickoff is scheduled for 7:30 p.m.