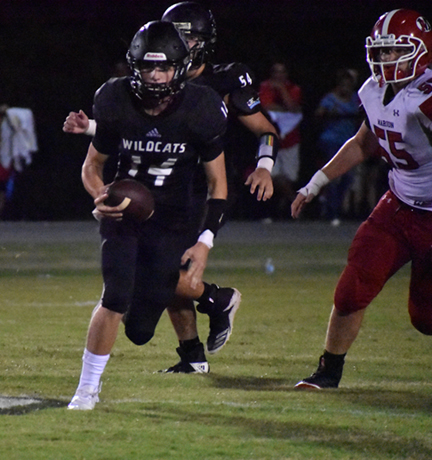 ELLAVILLE – The Wildcats of Schley County have been working all summer and through fall practice for this moment. They opened their season at home against region 4-A opponent Marion County Friday night, August 17, at Schley County High School.

It was a tough, hard-fought game in the first half, with Schley County trailing 14-7 at halftime. However, Marion County took over in the second half and went on to win 28-7.

In the first quarter, the Schley County offense moved the ball all the way down to the three-yard line of Marion County. Then with 3:42 to go in the first quarter, running back Tra Sampson scored. William Blackwell’s extra point was good and the Wildcats had a 7-0 lead.

However, Marion County struck twice in the second quarter. Quarterback Trice McCannon threw a 47-yard pass to Josh Rodgers for a touchdown. The extra point by Wilfredo Vail-Mendez was good and the Eagles had tied the game at 7-7 with 4:39 left in the first half. The Eagles got the ball back in the closing minutes of the half. Then with just four seconds before halftime, Travon Matthews scored from two yards out. The PAT by Vail-Mendez was good, and Marion County took a 14-7 halftime lead.

No points were scored by either team in the third quarter, as both defenses held the offenses at bay. However, Marion County struck again in the fourth quarter. The Eagles moved the ball down to the Wildcats’ 10-yard line. Then with 9:48 to go, McCannon scored from 10 yards out. The extra point by Wilfredo Vail-Mendez was good, and Schley County found themselves trailing 21-7.

The Wildcat offense was unable to get anything going in the second half. Then with 2:18 to go in the game, Marion County put the game away when Matthews scored his second touchdown from one yard out. The PAT by Vail-Mendez was good, capping off a 28-7 win for Marion County.

Schley County quarterback Garrett Peavy was 7-for-14 for 84 yards. His longest completion was for 39 yards. Jarrett Long also saw some time at quarterback for the Wildcats. Long went 1-for-3 for 20 yards and an interception.

Tra Sampson led the Wildcats’ running attack with 13 carries for 66 yards and a touchdown. His longest run from scrimmage was 25 yards. Jakim Hart ran the ball for 27 yards on 11 carries. Garrett Peavy also had four carries for 17 yards. His longest run from scrimmage was 11 yards. As far as the wide receivers were concerned, Dartavious Napper had two catches for 43 yards. His longest reception was for 39 yards. In total, the Wildcats’ wide receiving corps had a total of seven catches for 104 yards. In total, the running game for the Wildcats produced 121 yards on 32 carries.

On defense, Napper led the Wildcats in tackles with 13. Jacob Long had eight and Zamon Ross had seven. Ross also got a sack in the game. One of Long’s tackles was for a one-yard loss.

The Wildcats will try to rebound when they travel down to Edison, GA on Friday, August 24, to take on the Cougars of Calhoun County. Kickoff is scheduled for 7:30 p.m.