Lady Panthers come back from 13 runs down to defeat Monroe 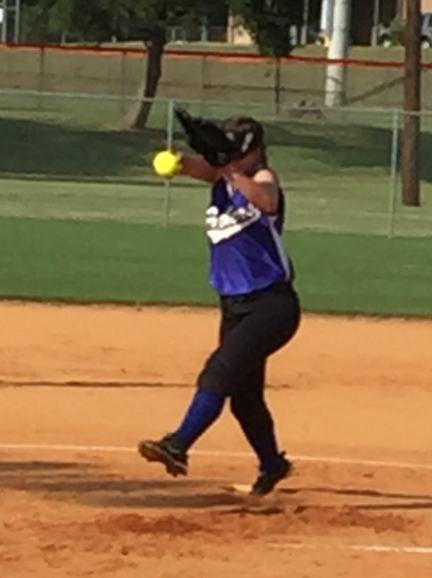 Americus – The Americus-Sumter Varsity Softball Team staged an incredible come-from-behind victory over Monroe on Tuesday, August 21, at the ASH softball complex. The Lady Panthers were down 13-0, but scored seven runs in the third, five in the fourth and four in the sixth to defeat the Lady Tornadoes 20-14. It was a tremendous way to open the season.

Monroe scored 13 of their 14 runs in the top of the first inning. ASH starting pitcher Tiffany O’Neal struggled to get hitters out. She walked six batters and hit five others. O’Neal tried her very best to hit the strike zone, but struggled with control. This resulted in 11 runs for Monroe. Taylor Garcia came on in relief for O’Neal. Two more runs scored, but Garcia was able to get out of the inning.

The Lady Panthers slowly crawled their way back into the game. They scored two runs in the bottom of the second inning.

Garcia was able to keep the Monroe bats quiet in the top of the third. After walking Angel Parker, Garcia struck out Demetria Wright and Jamiyah Mitchell. She then got Saniyah McDuffie to hit into a fielder’s choice to end the inning.

Americus-Sumter exploded for seven runs in the bottom of the third. Nyjah Carson, DeAsia Ford and Ali Bozeman each drew a walk to load the bases. Brianna Pope was then hit by a pitch, scoring a run. India Hughley then singled to drive home another run. Three more runs crossed the plate for the Lady Panthers in the inning, and Americus-Sumter was back in the game, trailing 13-7.

Garcia didn’t allow any runs or even a hit in the top of the fourth against Monroe. She struck out their first two hitters. She then walked Kenya Young. Then Annie Cooper reached on an error and the Lady Tornadoes had runners at first and second with two outs. However, Garcia was able to strike out Jakayiah Hatcher to end the threat.

Garcia continued to keep the Monroe hitters quiet. The Lady Tornadoes went in order in the top of the fifth.

In the bottom of the fifth, Americus-Sumter scored two runs to take the lead. India Hughley led off the inning with a walk, followed by an RBI single by Garcia to tie the game 13-13. Anastasia Clark then drove in the go-ahead run as she hit into a fielder’s choice. Americus-Sumter had come back 13-runs down to take a 14-13 lead.

Monroe tied the game in the top of the sixth. Saniyah McDuffie led off the inning by reaching on an error and Roneycia Sexton drew a walk. Sexton would eventually come around to score, but that would be the last run Monroe would score for the rest of the game.

In the bottom of the sixth, the Lady Panthers scored six runs to put the game away.  It was an amazing beginning to the season for Americus-Sumter.

“I asked the girls if this had happened a year ago, would they have given up. They said they would have,” ASH Head Coach Coleman Price said. “This year’s team gets down by a lot, but they keep fighting back.”

Americus-Sumter will travel to Columbus on Thursday to take on Region 1-AAAA opponent Shaw. First pitch is scheduled for 6 p.m.