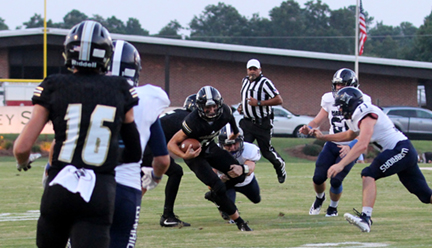 AMERICUS – The Southland Raider Football Team, like all other high school teams around the country, worked long and hard throughout the summer and through fall practice. It paid off as the Raiders won their season opener 29-6 over the Warriors of Southwest Georgia Academy.

Southland got on the board first when running back Parker Weldon scored from 20 yards out. The extra point by Zane Hines was good and the Raiders had an early 7-0 lead with 5:45 left in the first quarter.

Southland added to their lead when running back Clay Owens scored on a 19-yard touchdown run. The extra point by Hines was good, and the Raiders enjoyed a 14-0 lead at the half. 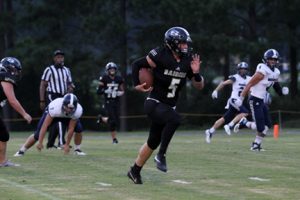 Southland running back Parker Weldon scored the Raiders’ first touchdown from 20 yards out in Southland’s 29-6 win.
Photo by Sheri Bass

The Raiders continued the onslaught in the second half. Southland quarterback Landon Law threw a 65-yard touchdown pass to Freddie Updike to give the Raiders a 20-0 lead. Southland coach Rod Murray decided to go for two. Clay Owens scored the two-point conversion to give Southland a commanding 22-0 lead.

SGA responded when quarterback Austin Pickle threw a 50-yard touchdown pass to Luke Benton to put the Warriors on the board 22-6 at the end of the third quarter. However, the Raiders put the finishing touches on the game. 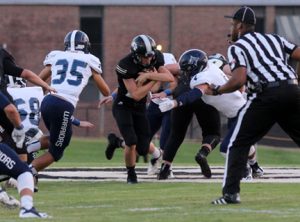 The Southland offense moved the ball all the way down to the SGA one-yard line. Parker Weldon then scored from a yard out. Zane Hines extra point was good, capping off a 29-6 victory for the Raiders.

Southland will try to go 2-0 next Friday night, August 31, when they travel up to Perry to take on the Hornets of Westfield. Kickoff is scheduled for 8 p.m.