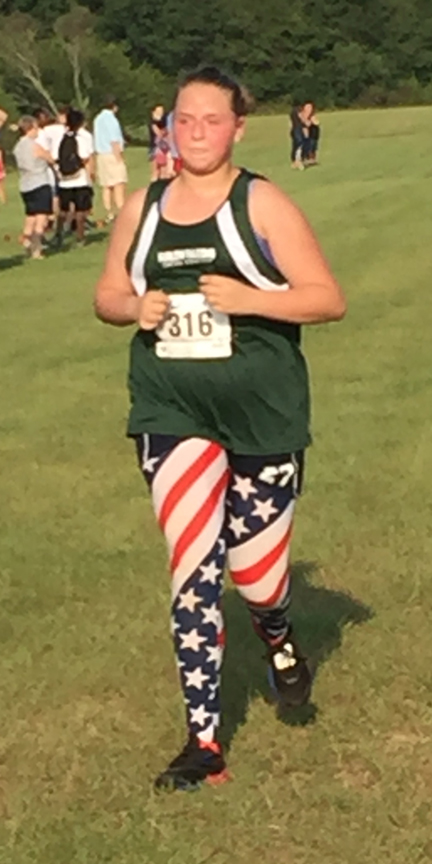 Furlow Charter’s Rebecca White uses cross country as a coping mechanism and a haven of rest to ease her mind from anxiety. Photo by Ken Gustafson

AMERICUS – No one goes through life without difficulties or adversity. All of us have to deal with some sort of struggle, whether it be physical or mental. For Furlow Charter’s Rebecca White, the sport of cross country is a haven of rest from the mental anguish that she goes through every day.

White, along with her mother, Linda White, sat down with the Americus Times-Recorder to discuss her struggles with Obsessive Compulsive Disorder (OCD), Depression and Attention Deficit Hyperactivity Disorder (ADHD) and how cross country has helped her cope with those struggles.

According to Linda White, Rebecca was diagnosed with Obsessive Compulsive Disorder (OCD) and ADHD. She has also dealt with bouts of depression for much of her life. “She (Rebecca) was diagnosed with OCD when she was in Second Grade,” Linda White said. “She sees a psychiatrist and goes to counseling every other week. They’re working on some coping mechanisms. One of her most favorite things to do is to pick at her skin. They’re trying to come up with some ways for her to cope with her anxiety without doing that.”

Linda White went on to say that they have taken Rebecca to a new counseling center, and it seems to be helping her. “She still picks at her skin. She is still obsessive about things. It’s going to be something that she will have to deal with the rest of her life, but we’re working on it,” Linda White said.

There are many different types of OCD. One type that Rebecca White has is the intense desire for proper organization. She wants items to be exactly where she thinks they ought to be. If they are not exactly where she thinks they ought to be, that irritates her. “When I see something that I think is not in the right order, I have a fit,” Rebecca White said. “I’ll be like, ‘Can I fix it? Can I fix it?’” Not only does she like to have her things put up in a certain organized way and in a certain order, it bothers her when other people aren’t as organized as she would like for them to be. She then wants to fix their things to her satisfaction. This is not arrogance on the part of Rebecca White. This is the controlling aspect that this type of OCD has on a person. White also suffers from anxiety attacks that compel her to pick at her skin and to chew on her jaw. When asked what causes her to do these things, White simply said “stress.” When asked what causes the stress, she did not know.

White also suffers from Depression. When asked what she gets depressed about, she said it makes her depressed when people die. She said that her depression lasts for about a week. During that time, she has a sad countenance on her face. If the OCD and the depression weren’t rough enough, White also struggles with Attention Deficit Hyperactivity Disorder (ADHD).

The good news for White is that cross country has been a haven of rest for her from all of the havoc going on in her mind. When she runs, it lessens her anxiety. White, 15, has been running cross country at Furlow Charter for two years. She recently competed in the Furlow Charter Fast Feet Invitational held on Saturday, August 25, at the SCPRD Park located on US 19 South. She finished the race in a time of 34:50.56. Since she began running cross country at Furlow, White’s best time has been 32:51. “When she runs, she doesn’t think about the OCD or anything like that,” Linda White said. “I think one of the big reasons that she runs is because she has a very supportive coach. “Coach John Daughety is very supportive.” Linda White said. Linda White went on to say that Daughety is the one that convinced her daughter to run and play soccer. “He (Daughety) sees things in kids that a lot of people don’t see,” Linda White said.

As far as what she needs to improve on in cross country, White’s mother said that Rebecca needs to work on her pace. “She usually starts a race out with a really good pace, but she loses something there toward the end. I think it might have something to do with some of the medication that she takes,” Linda White said. “She needs to work on her pace and maintain her pace. Coach Daughety’s goal for her is to be around the 25-minute range before the season is over.” Linda White went on to say that Rebecca has made some improvements from last year. “She ran a lot of 5Ks over summer break,” Linda White said. “She didn’t stop running because school is out. She kept it up.”

Another way that White deals with her OCD, Depression and ADHD is to color. “She has coloring books. She likes to play with clay and play dough. Anything that is sensory, she loves,” Linda White said.

As far as her favorite subjects in school, White likes Math and Reading because of her teachers that teach those subjects. “My Math and English teachers make me like Math and English,” White said. The Varsity Cross Country Coach, John Daughety teaches Math and Nichole Walker teaches English.

Another thing that has helped Rebecca White cope with the problems that she has is having pets. White has six dogs: A Rat Terrier, a Jack Russell Terrier, a Chihuahua, a Beagle Whippet Mix, and a Bo Shih (mix of Boston Terrier and Shi Tzu) among others. White would like to go to college and study to be a Veterinarian. “With the exception of one, every other dog is a rescue dog, something we found,” Linda White said. “The Beagle Whippet Mix was actually found at the McDonalds on Lamar Street in the garbage can. Somebody had put a mama and some puppies in the garbage can and we brought them home. She (Rebecca) has a really big heart for animals.”

Rebecca was home schooled by her mother for three years before she was enrolled into Furlow. “In the fifth grade, she wanted to do bodily harm to herself,” Linda White said. “Her depression and anxiety was so bad that she had to go out on Medical Home-Bound. She finished out her fifth-grade year at home.” Linda White went on to say that Rebecca was home schooled until Furlow Charter opened. “Furlow has really been good for her,” Linda White said. “She’s behind in Reading and Math, but they work with her in a way that helps her make progress where she didn’t before.” Linda White went on to say that Rebecca has been enrolled in Furlow since 2015. Until Rebecca was enrolled in Furlow, she had never met an IEP Goal. However, this year, she met every IEP Goal that they had set for her. An IEP Goal is an individual learning plan that schools come up with for kids in Special Education. “She’s had some problems with some bullies, but it’s take care of immediately and you don’t have any more trouble,” Linda White said.

This is an example of caring teachers and coaches stepping in to make a positive difference in a young person’s life. Rebecca White has had to cope with three major obstacles all throughout her life. However, running cross country at Furlow Charter has made a huge positive difference for her. It has given her a sense of self-worth, dignity and confidence. Most importantly, for her unique situation, the sport of cross country has given her a way to cope with the anxiety and depression that she deals with. It has given her a haven of rest from the mental storms that she deals with. With the support of her family, friends, Coach John Daughety and the rest of the faculty at Furlow, Rebecca White will hopefully one day achieve her goal of going to the state meet, as well as her vocational goal of becoming a Veterinarian.