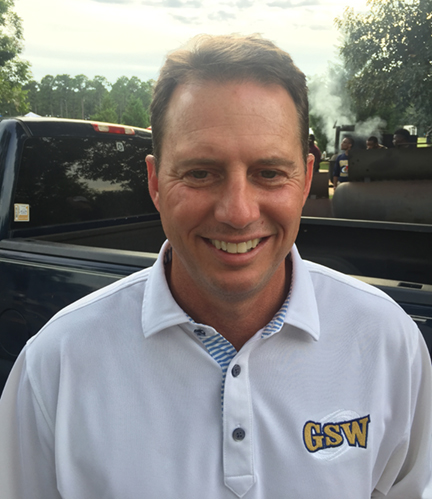 AMERICUS – It’s not often to find a college president who played in the NFL, but that is exactly what Georgia Southwestern State University President Neal Weaver Ph.D. did, at least briefly.

Weaver, a native of Oklahoma City, OK, was the starting field goal kicker at Oklahoma Panhandle State University in the late ‘80s. Weaver kicked field goals, extra points and was a kickoff specialist while playing for the Aggies. “I played my last year in college in 1989 and signed as a free agent in 1990,” Dr. Weaver said. “I went to training camp with the Jets and got beat out by a guy named Pat Leahy.”

According to information on Wikipedia, Leahy played in the NFL from 1973 to 1992.

According to Weaver, his senior year, 1989, was the year that they took away the kicking T from college kickers. “We use to kick off from a two-inch block and they took that away on field goals,” Dr. Weaver said. “A lot of the kickers who were at the big schools really struggled to change. I did really well. I kicked two field goals from more than 50 yards my senior year. A lot of scouts started to see that here’s a guy that is making the transition and is doing very well. That helped a small-school guy get some attention.” Weaver went on to say that they still had holders on field goal and extra point attempts, but they put the ball on a two-inch block. “It was a lot easier to kick when you didn’t have to kick it off of the ground.” Weaver said. “When they changed the rules for college in 1989, a lot of the big-school kickers couldn’t make the transition to kicking it off the ground, but it worked out for me.”

Though he didn’t make the Jets’ squad in 1990, Weaver tried a new professional league that had been formed back then: The Arena Football League. “The arena league was really, really young at that time,” Weaver said. “It might have been their first or second year. They basically paid us $400 a game, but you were only guaranteed one game at a time. They always liked to get a local kicker, so it was very hard to get a job. You might get a job, and then the next week, they would hire some local guy to come and kick. It didn’t work out very good.”

Weaver went on to say that another league called the World League was formed two years before he graduated. “They halted the league for a year. That was the year I would have been eligible,” Weaver said. “They started it back for a couple more years, but the time that I would have been eligible to play was the time that they shut it down. I just didn’t get any chances after the Jets.”

As far as becoming a college president, Weaver simply summed it up to falling into things that turned out to becoming pretty good choices. “I went to work at a newspaper and then decided I’d get into Public Relations,” Weaver said. “I started doing Public Relations at Southeastern Oklahoma State University. I got into the advancement type of work and that’s how it started.”

Though he didn’t make it into the regular season with the Jets, Weaver can still say he was in the NFL, if only for a brief moment.