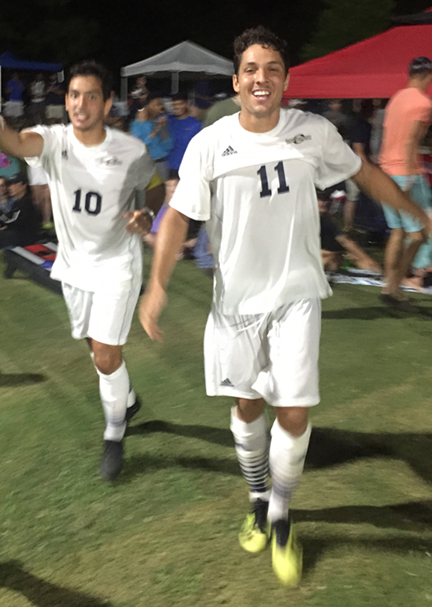 Senior forward Matheus Alves (11) celebrates with #10 Thiago Elias and the rest of their teammates after Alves scored to give the Hurricanes a 1-0 lead. Photo by Ken Gustafson

AMERICUS – Wednesday night, September 5, was a night for Georgia Southwestern State University to remember for decades to come. It was a night that will be celebrated and remembered for years by the GSW Men’s soccer program, the GSW athletic department and the university as a whole. It was a historic night as the GSW Men’s soccer team defeated Brewton-Parker College 2-0 in the program’s first-ever match played under the lights in school history.

Both goals came in the second half. The first goal was scored by Matheus Alves off a rebound from a shot by Dylan Marshall. Then Marshall himself scored the insurance goal with four minutes left in the match.

“It’s been a great day from start to finish,” GSW men’s soccer coach Warren Russ said. “I thought all the events were fantastic. The game was great. To end it with the fireworks was unbelievable. By far, it was the best day we’ve had since I’ve been here. The crowd was fantastic. We can’t thank them enough for their support. It absolutely made the difference tonight.”

Before the match began at 7 p.m., fans began tailgating next to the GSW Soccer Complex. Hamburgers, hot dogs and drinks were given out. People were playing corn hole. It was a great time of fun, frivolity and fellowship. “It’s wonderful. We’re glad that we can make it happen,” GSW President Dr. Neal Weaver said. “It changes the atmosphere clearly. We’re able to stay out of the heat of the day. We’re able stay out of the time that the people are working. People can come out and hopefully enjoy it with their family. Hopefully, we’ll see a lot more kids out here who will look up to our athletes and see them participate. Hopefully, it will inspire the kids to participate as well.” Dr. Weaver went on to say that he felt that it was a great opportunity to be more connected to the community.

A new version of the GSW mascot “Surge” was introduced. A life flight helicopter was supposed to fly in and land on the field with the game ball, but that plan had to be cancelled.

After the pre-game festivities were over, it was time to get down to some serious and intense soccer. Brewton-Parker, an NAIA school out of Mount Vernon, GA, came into this match with a 2-1 record. They defeated Hiwassee College (TN) 6-1 and lost to Freed-Hardeman (TN) 2-0. GSW came into this much-anticipate match with a record of 0-1-1. They lost their season opener at Warner University 3-1 on Thursday, August 30, then tied Webber International 2-2 on Saturday, September 1. 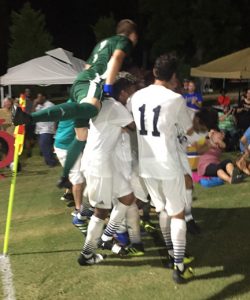 Both teams had chances to score in the first half, but the Hurricanes had more of the run of play. Thus, they had more chances to score than the Barons did. Brewton-Parker did have some opportunities. A long ball was sent into the box to an on-running BP player, but GSW goalkeeper Francesco Bazzano was there to smother the ball before the player could get a shot off. The Barons had another opportunity later on in the first half as Manuel Casanova took a shot on goal that sailed wide. The Barons then sent a through ball into the box, but Bazzano ran all the way over towards the sideline and played it out of danger.

Probably GSW’s best opportunity for a first-half goal came in the 33rd minute when Divin Moke made a pass to Alves. Alves had a great look at goal, but his shot hit the crossbar. Both teams ended the first half tied 0-0. 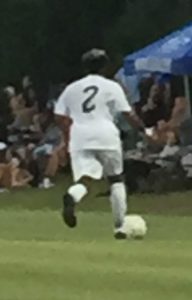 GSW junior defender JP Merlet advances the ball towards Brewton-Parker’s goal in the first half.
Photo by Ken Gustafson

At halftime, a ribbon-cutting ceremony was performed by members of the Sumter County Chamber of Commerce, GSW President Dr. Neal Weaver, athletic director Mike Leeder, head men’s soccer coach Warren Russ and a member of the team: senior defender Julian Rugel. The ceremony was done to commemorate the occasion of having the first home match under the lights.

During the second half, the Hurricanes exerted more pressure on Brewton-Parker’s back line, creating more chances to score. The Hurricanes had the ball at the Barons’ end of the pitch and were trying to score, but the ball was knocked out for a corner kick for GSW. Jonathan Sayers took the corner kick. The ball was headed by a GSW player and then headed again by Alves, but it went just wide of the net. It was enough of a threat to make the BP goalkeeper dive after it.

GSW continued to put pressure on Brewton-Parker. The ball was crossed into Dylan Marshall, but his shot went wide of the net. Marshall had another chance to score a few minutes later, but the Barons’ goalkeeper came out to save it in time. 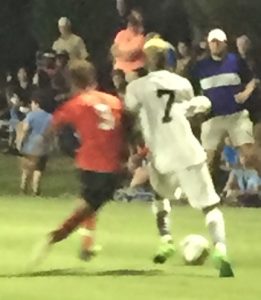 Brewton Parker had an opportunity to score when GSW defender Nick Bottka was whistled for a foul just outside the 18-yard box. The Barons were awarded a free kick, but they were unable to capitalize.

Then Matheus Alves, who had so many chances in the first half to put GSW in front, finally broke through for the Hurricanes. Dylan Marshall took a shot on goal. The shot was deflected by the BP goalkeeper, but Alves scored on the rebound to put the Hurricanes in front 1-0. 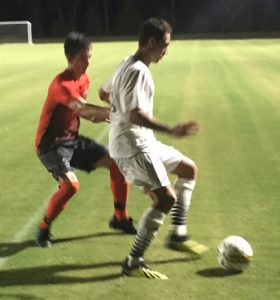 Matheus Alves shields off a Brewton-Parker defender from the ball. Alves scored the Hurricanes’ first goal of the match.
Photo by Ken Gustafson

Then in the 86th minute, the Hurricanes got their insurance goal. Marshall sent a low shot past the Barons’ keeper and into the far-right corner of the net. “Our forward, Matheus (Alves) was pressuring the ball,” Marshall said. “He stripped the ball from a BP player. The ball was open in my space, and I took the shot and scored. I do it every day in practice.” Brewton-Parker didn’t mount another threat, and the Hurricanes went on to win the historic home game 2-0. 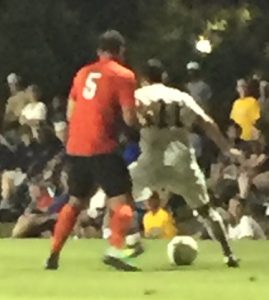 Coach Russ was pleased that his team controlled most of the run of play and that they were the aggressors, but was concerned about the Barons’ ability to cause trouble on the counter attack.

“I thought that if we got ourselves out of shape (out of formation), we would have a problem in transition with them,” Russ said. “I thought we were the aggressors for the majority of the game. We had more possession than them, but they were difficult for us if they hit us on the break quickly in transition. We needed to pay attention to those moments and they did get a few in the first half and maybe a couple in the second half. I think that overall, we did a really good job of sorting out those issues.” 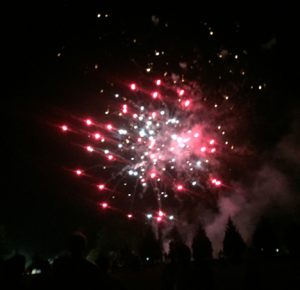 Players and fans were treated to a wonderful fireworks show after the match.
Photo by Ken Gustafson

After the match, the players and fans were treated to a lengthy, fantastic fireworks show. It was a night that GSW players, students and fans will never forget. 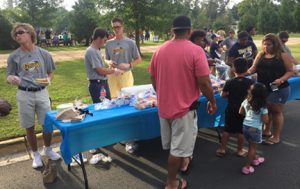 There’s much more work to be done for the Hurricanes. They will travel to Pensacola, FL to take on the Eagles of Pensacola Christian College on Saturday, September 8. Kickoff is scheduled for 4 p.m.

The Hurricanes next home match will be against Middle Georgia State on Wednesday, September 12. Kickoff for that game is scheduled for 5 p.m. 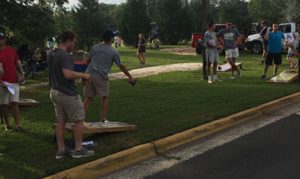 Fans playing corn hole during the pre-game festivities before the historic soccer match under the lights.
Photo by Ken Gustafson 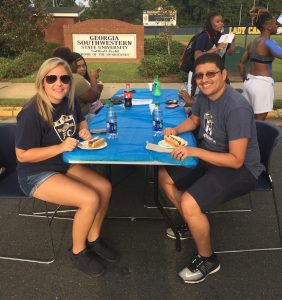 The Hurricanes begin Peach Belt Conference play on the road when they travel to Clayton State University for a 3:30 p.m. match on Saturday, September 22.