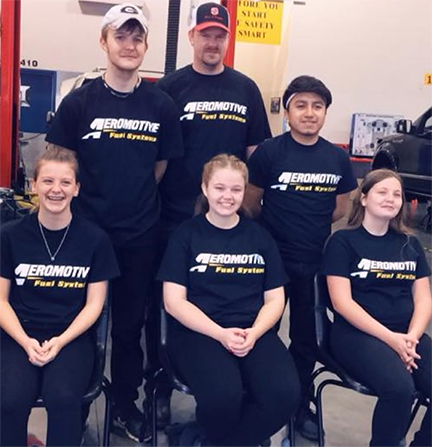 AMERICUS — In a little over a month, the Americus-Sumter high School Engine Building Team will travel to Las Vegas to compete in the Hot Rodders of Tomorrow Engine Building National Championships.
The goal is to take a part a car engine all the way down to its basic block and then build it back up again in 33 minutes.
According to ASH Head Coach Frederick Mohl, 255 high school engine-building teams from all over the country competed for a spot in the National Championships in Las Vegas which will take place Oct. 30 through Nov. 1. Mohl said that 51 teams qualified for the National Championships, and his team was one of them. “We barely qualified with a time of around 32:25,” Mohl said.
The team that won the national championship in 2017 was Team FEL-PRO from Tulsa Tech in Tulsa, Oklahoma. Their average time was 17:06.
“At the National Championships, each team gets three chances, or runs,” Mohl said. “They take the average time out of the three runs.”
The ASH team consists of five members: Emily Given, Tyler Brown, Amber Enloe, Cameron Mathis and Jonathan Marin.
Some interesting facts about this competition:
The fastest time during the 2018 season was 18:12 by Team Vibrant Performance from Burton Center High School in Salem, Va. Forsyth Central High School in Cumming, Ga., has six teams that have qualified for the 2018 Dual National Championships. Forsyth Central has the most students participating in the competition with 30.
The Americus-Sumter team qualified for the National Championships at the Universal Technical Institute competition held in Mooresville, N.C. on March 31 of this year. They finished in seventh place with a time of 32:25.
According to Mohl, the team members must break down a Chevrolet 350 car engine to its basic block and then build it back up in less than 33 minutes. However, if a mistake is made during the process, they are penalized extra time. There is a team member at the table that dispenses the tools to the other team members that are needed to break down the engine and build it back up again in the allotted 33 minutes.
For the teams that finish in the top 10 in the National Championships, each team member of each of those teams will receive scholarship money to attend automotive schools such as Universal Technical Institute (UTI), the School of Automotive Machinists and Technology (SAM Tech) and Ohio Technical College.
Each member of the national championship team receives $10,000 in scholarship money. Each team member of the national runners-up receives $9,500 in scholarship money. In total, supporting colleges gave out $4,162,500 in scholarship money in 2017.
The ASH team will be leaving Oct. 28 for Las Vegas.