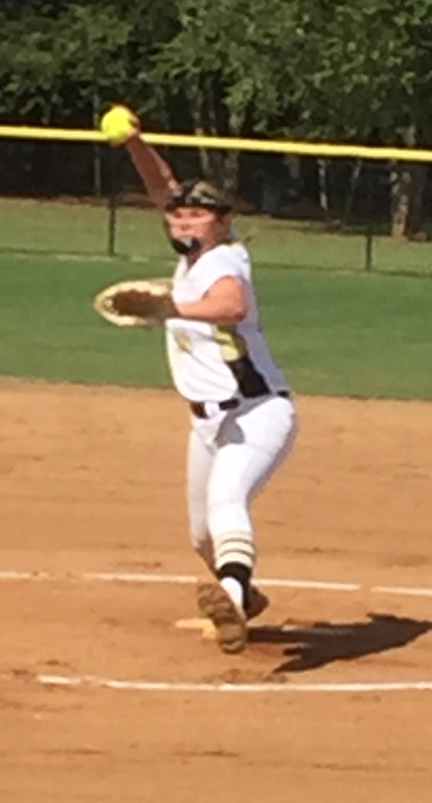 Southland pitcher Rylan Youngdale walked four but struck out one batter in the Lady Raiders’ 6-4 loss to Windsor Academy. Photo by Ken Gustafson

AMERICUS – Windsor Academy centerfielder Jordan Moss belted a two-run home run in the top of the sixth inning. It would prove to be the difference in the Southland Lady Raiders’ 6-4 loss to the Lady Knights.

In spite of the loss, Southland head coach Rusty Tondee was not discouraged with his team’s performance or where they are right now in the season. “I think we’re in great shape. I feel really good about our team and where we are right now,” Tondee said. “We’re 8-6 right now with some big region games coming up. We have a road game at Crisp Academy. Then we face Deerfield-Windsor at home and then we have a huge region game at Valwood.”

Southland starting pitcher Rylan Youngdale gave up six runs on 10 hits, including the two-run home run by Moss in the sixth inning. Four of those runs were earned. She struck out one batter and walked four. Southland’s two hits came from Holly McCain and Reese Roland. Both came in the bottom of the second inning. 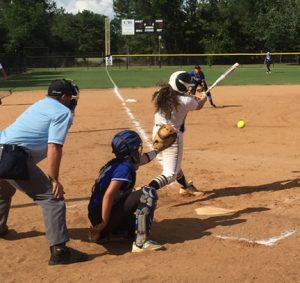 Southland shortstop Holly McCain hit a two-run triple in the bottom of the second inning in the loss to Windsor Academy.
Photo by Ken Gustafson

The Lady Knights scored two runs in the top of the first off of Southland errors. However, the Lady Raiders bounced back in the bottom of the second inning. Reese Roland led off the inning with a base hit. Then Katie Rogers drew a walk. Both runners advanced on a wild pitch. Morgan Minick struck out for the first out, but Abby Lightner and Hannah Mitchell both reached on a fielder’s choice. After Alli Dent drew a walk, McCain hit a triple, driving in two runs. Dent, Roland, Lightner and Mitchell all scored to give the Lady Raiders a 4-2 lead.

Youngdale was able to keep the Lady Knights scoreless in the second, third and fourth innings. However, in the top of the fifth, Windsor catcher Lindsey Arrington doubled and advanced to third on a wild pitch. Sierra Usery then reached on an error. Both Arrington and Usery would score to tie the game at 4-4.

With the score tied 4-4 in the top of the sixth, the Lady Knights scored the two runs that would make the difference in the ball game. Alanie Chandler led off the inning with a single. Then Jordan Moss hit the two-run home run. With two outs, Sierra Usery and Makalie King both singled and advanced to second and third respectively on a wild pitch. Fortunately for Southland, Youngdale was able to get Josie Spradley to fly out to end the inning.

After the top of the sixth, Youngdale did not give up any more runs, keeping her team in position to tie or win the game.

With one out in the bottom of the seventh, Southland was able to get runners at first and third. TJ Bowden drew a walk and Mitchell reached on a fielder’s choice. An error by the Windsor second baseman allowed Bowden to reach third base. However, Alli Dent popped out and Holly McCain grounded out to end the game.

Southland (8-6) will try to rebound with a win when they travel to Cordele on Monday, September 10, to take on Crisp Academy at 4:30 p.m. The very next day, they go back into region play when they host Deerfield-Windsor on Tuesday, September 11. First pitch for that game is scheduled for 4:30 p.m.