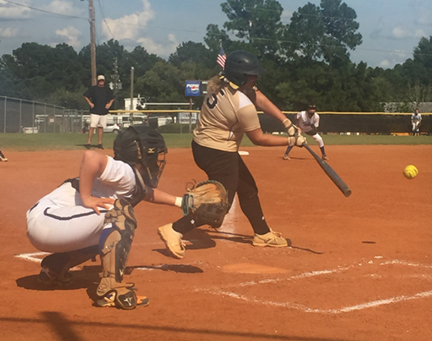 CORDELE – The Southland Lady Raiders Softball Team jumped out to a 14-0 lead and never looked back as they won easily over Crisp Academy 14-4 on Monday, September 10, at Crisp Academy.

The Lady Raiders scored five runs in the top of the first inning. Holly McCain, Alli Dent and Brookland Weaver each had three hits. McCain belted a two-run home run in the top of the fourth inning. The hit parade for Southland continued in the fourth as they scored a total of nine runs to take a 14-0 lead. In addition to solid plate appearances by McCain, Dent and Weaver, Sara Beth Storey also had two hits on the day and drove in two RBIs.

The game ended on a tremendous play as Southland left fielder TJ Bowden caught a fly ball for the second out of the inning. Bowden then threw a perfect strike to catcher Sara Beth Storey, who tagged the runner out for the third and final out of the game.

Alli Dent started in the circle for the Lady Raiders. Dent pitched all five innings and got the win.