Sumter County recreation soccer off to a great start 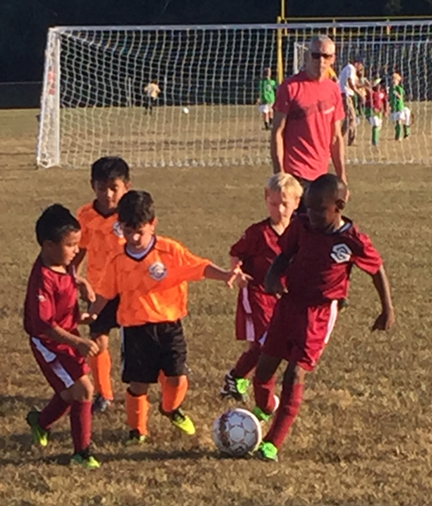 : A.J. Bridges of the Rapids (maroon team) scored a goal in the game against the Dynamite. Photo by Ken Gustafson

AMERICUS – Monday, September 10, was the first day for the recreation soccer leagues put on by the Sumter County Parks and Recreation Department. Kids from ages five up to 13 are participating in the most popular sport on earth and having a fun time doing it. 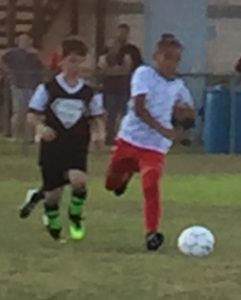 n the U7 age group, which includes kids ages five to six years old. The Dynamite, dressed in bright-orange jerseys played the Rapids, dressed in maroon jerseys. One coach told the Americus Times-Recorder that officially, they don’t keep score at that age division, but the parents and kids do. At this level, the kids are learning the very basics of the game: stopping the ball with their feet, passing the ball, but most importantly, having fun. One player for the Rapids, A.J. Bridges, scored a goal in this game. 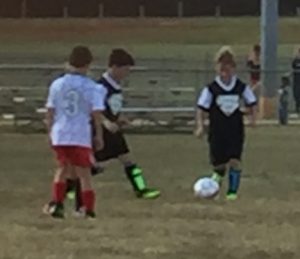 Jackson Crowley with the ball for the Black Cats.
Photo by Ken Gustafson

In the U10 division, the Sumter County Arsenal played the Schley County Black Cats. Arsenal jumped on the Black Cats right away as Juan Aguirre scored at least four goals. In this division, they do keep score, but there is a 10-goal mercy rule. Arsenal defeated the Black Cats 10-0. Along with Aguirre, both Cole Parkinson and Garrett Sellers had two goals, and both Anna Brown and Jack Brown each had one.