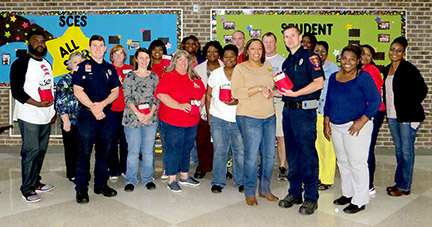 AMERICUS — Recently, life-saving bleeding control kits were delivered to Americus-Sumter County Middle School, Americus-Sumter County Intermediate School, Americus-Sumter County Primary School, Americus-Sumter County Elementary School, Americus-Sumter High School, Americus-Sumter County Ninth Grade Academy, Furlow Charter School, and Southland Academy in Americus, after at least 10 school staff at each location were trained on how to “Stop the Bleed.”
Earlier this year, the Georgia Trauma Commission along with the Georgia Trauma Foundation, the Georgia Society of the American College of Surgeons, and the Georgia Committee on Trauma collaboratively launched the nationwide “Stop the Bleed” campaign in Georgia that puts knowledge gained by first responders and our military into the hands of the public to help save lives by stopping uncontrolled bleeding in emergency situations. The first phase of the campaign includes the school response program, which is specifically designed to train and equip school staff on how to control bleeding with the tools provided. Bleeding control kits contain a tourniquet, wound packing materials, qnd gloves to prevent further exposure.
Research has shown that bystanders, with little or no medical training, can become heroic lifesavers.
Similar to the use of CPR or automatic defibrillators (AED), improving public awareness about how to stop severe bleeding can be the difference between life and death for an injured person.
While the campaign has been funded by the Georgia General Assembly to train and equip all Georgia Public Schools with bleeding control kits, our efforts don’t stop there. Our goal is to build resilience by educating and empowering all citizens to be aware of the simple steps that can be taken to stop or slow life threatening bleeding.
For more information on these efforts and how you can get involved in the “Stop the Bleed”campaign, visit www.stopthebleedgeorgia.org