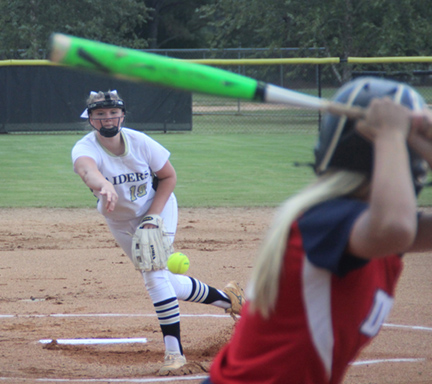 With one out in the top of the first inning, Holly McCain singled, followed by a single by Sara Beth Storey to put runners at first and second with one out. Brookland Weaver then singled to center field, scoring McCain to give Southland a 1-0 lead.

The Lady Raiders struck for another run in the top of the second. With one out, Morgan Minick bunted and reached on an error by the Valwood pitcher. Minick advanced all the way to third base on the error. Abby Lightner hit into a fielder’s choice, but Minick scored to give Southland a 2-0 lead.

Youngdale continued her dominating performance on the mound as she retired in order the Valwood hitters in the bottom of the second.

In the top of the third, the Lady Raiders scored their third and final run. Sara Beth Storey and Brookland Weaver both grounded out to start the inning. However, Reese Roland hit a pop fly and reached on an error by the Valwood right fielder. Katie Rogers then hit a ground ball to the Valwood first baseman, who committed another error. Roland, who had advanced to second on the previous error, scored via the second error. Errors were a huge problem in the game for Valwood. They committed a total of five for the game. On the other hand, Southland played errorless ball.

Rylan Youngdale gave up only one hit the whole game, while the Lady Raiders scored three runs on five hits. Sara Beth Storey and Brookland Weaver went 1-for-3 at the plate, with Weaver driving in an RBI. Abby Lightner also went 1-for-3 and drove in an RBI.

The Lady Raiders will try to continue their winning ways when they travel to Thomasville, GA on Tuesday, September 18, to take on Brookwood. First pitch is scheduled for 4:30 p.m.