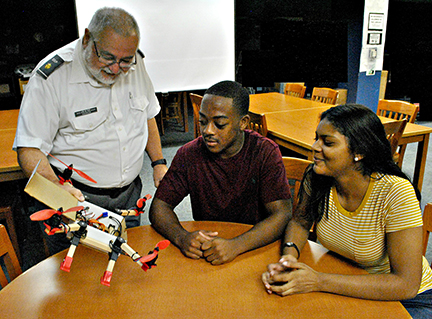 AMERICUS — Two United States “Civil Air Patrol” (CAP) officers visited Americus-Sumter High School (ASHS) recently to promote interest in STEM training. The visitors spoke to a group of students from Ethel Rankine’s pre-engineering class, outlining potential benefits of choosing a STEM career path. STEM is a commonly accepted acronym used for subjects involving “Science, Technology, Engineering, and Math.”
Maj. Jim Harmon and his wife Lt. Lisa Harmon spoke to students about their work with the Civil Air Patrol. The Harmons also discussed engineering in general and sensitive issues surrounding cyber domain security in our post-911 world.
“First and foremost we are here to hopefully increase the students’ interest in STEM as a career choice,” said Maj. Harmon. “All military branches are struggling to fill STEM positions right now because, as Boomers retire, there aren’t enough candidates to fill those vacancies.”
The major began his presentation discussing the need for the CAP, and the role it plays in disaster situations.
“The Civil Air Patrol performs more search and rescue than any other service in the country,” he said. “We are a primary player under the overall U.S. emergency umbrella, often working with other agencies such as FEMA.”
ASHS students listened eagerly to the many stories shared by the two CAP visitors. The Harmons related several anecdotes, things they witnessed first-hand. They spoke about their dramatic attempt to recover an infant who was swept away from his parents’ home by a tornado in Albany in early 2016. Maj. Harmon is the leader of the “Albany Composite Squadron” which has over 100 members, including 60 cadets and 40 ready aircraft. The cadets in his squadron are high school and college students from around the southwest Georgia area.
“Our squadron in Albany was the first composite squadron created in Georgia,” he said.
He stressed the importance of STEM in everyday life, and the career opportunities it could offer any young person today interested in pursuing it as a career path. Numerous students expressed interest in considering a STEM career and several took the opportunity to speak with the Harmons informally after the presentation.
ASHS instructor Rankine, who arranged and sponsored the Harmons’ visit for her students, said she considers the presentation a great success.
“Our students were presented with real life examples of how they can serve in the Civil Air Patrol as cadets,” she said. vThe speakers offered an overall invaluable learning experience, and highlighted the critical demand for STEM workers in today’s world.”