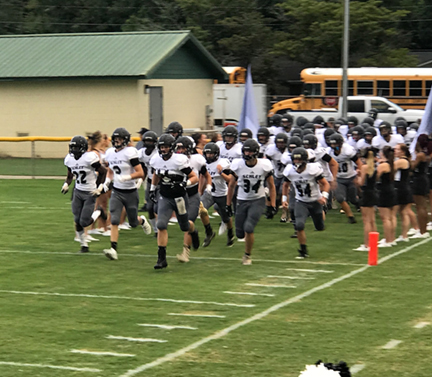 The Schley County Football Team coming on to the field for an exhibition game against Mitchell County. They've come a long way since as they blasted Hawkinsville 34-0 Friday night. ATR Archive

Tra Sampson opened the scoring with a four-yard touchdown to give the Wildcats a 6-0 lead. Later in the game, Zamon Ross scored on a 47-yard run to increase Schley County’s lead to 12-0. The Wildcats decided to go for two. They succeeded as Jamyron Clayton scored on the two-point attempt to make it 14-0 Wildcats.

The Wildcat defense stifled Hawkinsville all night, and the Wildcats continued to roll. Sampson scored his second touchdown: a one-yard run to make it 21-0 by the half.

In the second half, Zamon Ross scored on a 25-yard reception from quarterback Garrett Peavy.  Landon Dailey scored the final touchdown on a four-yard run to make the final score 34-0 Schley County.

The Wildcats travel to Dooly County next Friday, September 21. Kickoff is scheduled for 7:30 p.m.