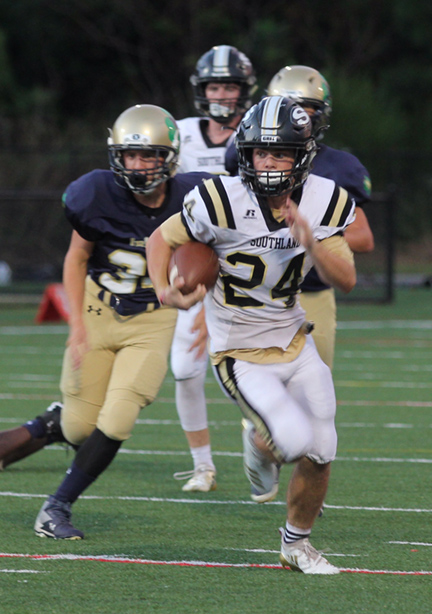 DULUTH – Southland Academy (4-0) dominated Notre Dame Academy 48-7 Friday night in Duluth to keep their undefeated season going. The opening play of the night was a run of -6 yards for Notre Dame’s Nassir Warner. That was telling for how the rest of the night would go.

Southland only had 36 yards to go on their opening possession after a shanked Notre Dame punt. The Raiders covered the ground in just three plays and capped off the drive with a 27-yard touchdown pass from Landon Law to Parker Weldon. However, the score stayed 6-0 after Zane Hines’ extra point sailed wide left. He would get plenty more opportunities to hit an extra point.

The second play of the ensuing Irish possession was a fortunate one for the Raiders. Quarterback Thomas Mlakar’s pass was tipped straight into the arms of Owen Hufstetler, who had nothing but open grass in front of him for a 29-yard pick six. From there, it became the Clay Owens show. 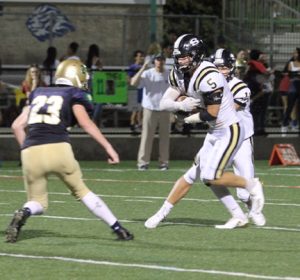 The junior running back broke free on a 45-yard run up the middle for a touchdown on the first play of the next possession, making the score 20-0. Owens had another long touchdown run, this one from 37-yards out 2:26 later. Before that though, the man who caught the opening touchdown got in on the act in the ground game. Parker Weldon broke a series of tackles for his second touchdown of the game.

Ragan Norman added the second defensive touchdown of the night for the Raiders with a strip sack deep in Notre Dame territory. Norman pounced on the fumble that he forced to take it in for an 18-yard score.

The final offensive snap of the first quarter put an exclamation point on one of the most dominant quarters of football one will ever see. Quarterback Landon Law called his own number on an option play for a 15-yard touchdown.

“Our team did a great job of doing the little things that we focus on every week”, Southland Head Coach Rod Murray said. “It helped us get off to a great start and we got a bunch of reps for a lot of players. That helps us a lot for the home stretch because we have some tough games in front of us.”

It was 48-0 after one quarter. Owens finished the frame with 102 rushing yards. Notre Dame Academy failed to pick up a first down. The running clock was on.

A 42-minute lightning delay was the first thing to slow down the Raiders all night. At halftime, the Raiders still led 48-0. Notre Dame Academy broke the shutout with a touchdown in the final minute on a one-yard keeper from Mlakar.

The undefeated Raiders will be back in action next Friday night, September 21, for the Homecoming Game against Heritage (Newnan). Kickoff is scheduled for 7 p.m.