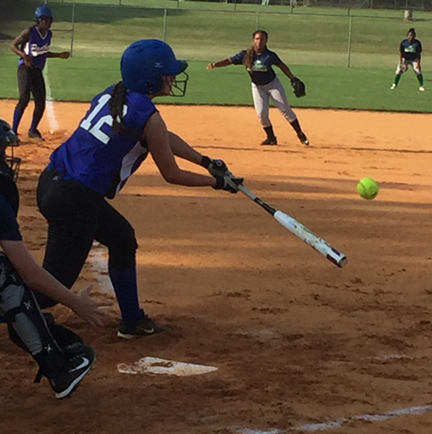 Americus-Sumter pitcher Taylor Garcia seen here batting against Furlow Charter earlier in the season. In spite of a rough outing against Pataula Charter, Garcia was able to strike out three batters. Photo by Ken Gustafson

CUTHBERT – The Americus-Sumter Softball Team struggled in the field against Pataula Charter Academy. They committed a total of nine errors, which played a part in their 20-5 loss to the Pataula Lady Panthers.

The game was played Monday, September 17, on the campus of Andrew College in Cuthbert, GA, where Pataula Charter plays their home games.

Things started out well for Americus-Sumter. De’Asia Ford led off the game with a single and Adrienne Anthony reached first on a dropped third strike. Anthony was thrown out at second, but Ford made it to third. Brianna Pope reached on an error, scoring Ford to give Americus-Sumter a 1-0 lead.

However, Pataula Charter responded with 11 runs in their half of the first. Megan Ellis led off with a triple off of ASH starting pitcher Taylor Garcia. After Garcia struck out Haley Kintzinger for the first out, Grace Houston doubled in Ellis to tie the game at 1-1. This was the beginning of an 11-run explosion by Pataula Charter. The ASH Lady Panthers hurt themselves in the inning with errors, walks and hit batsmen.

Americus-Sumter scored two runs in the top of the second inning. Nyja Carson singled with one out. Kristin Wooden and De’Asia Ford both drew walks, and Carson advanced to third on a passed ball. Carson then scored on another passed ball to make the score 11-2 Pataula Charter.

De’Asia Ford went 1-for-1 at the plate with a run scored and two walks. Taylor Garcia also went 1-for-1 and drew a walk. Garcia, who started in the circle for ASH, gave up 20 runs on 11 hits. Only five of those runs were earned. She walked five batters, but on a positive note, she struck out three.