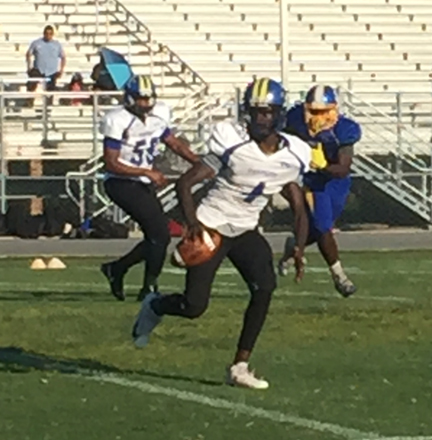 Americus-Sumter JV quarterback Cameron Evans rolling out on a play ready to throw the ball. Photo by Ken Gustafson

CORDELE – The Americus-Sumter Panthers of tomorrow hit the field at Crisp County and came up with a 14-8 win over the Cougars on Thursday, September 20, at Crisp County High School.

It was the junior varsity version of the “Battle of Lake Blackshear.”

After the game, things got heated as players from both teams started pushing and shoving each other. The players had to be separated by the coaches. In the Panthers’ post-game meeting, Coach Larry Harold chastised his team for their lack of composure after the game. However, he was pleased with the effort and performance of the team. “Our JV is doing good. They’re 2-1 right now,” Harold said. “They’re getting better. This is a heated rivalry and things got out of hand, but we try to teach them that we are a class-personified program and we want to remain that way. No matter what the other team says, we have to walk away and keep our composure. They’ll learn. That’s what JV games are for: to learn and to get better.” Coach Harold went on to say that he was pleased with the defensive effort. He was also pleased with his young quarterback Cameron Evans, an eighth grader. 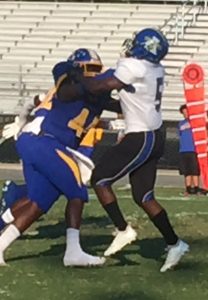 The Cougars got the ball first on offense, but the Panther defense was up to the task and stopped them on downs. ASH got the ball at their own 28-yard line. On the first play from scrimmage, running back Christian Wayman ran 78 yards for a Panther touchdown. Americus-Sumter tried to go for two, but failed on the attempt. Nevertheless, they led 6-0. Both teams played extremely hard defensively in the first half, and the score was still 6-0 Panthers at halftime.

Americus-Sumter got the ball to start the second half. On the kickoff, Wayman ran the ball all the way down to the Cougars’ 35-yard line. The Panthers moved the football down inside the 20. They would eventually move the ball down to the six-yard line. Then quarterback Cameron Evans pitched the ball to A.J. Stokes, who ran it in for another Panther touchdown. ASH decided to go for two and made it. The score was now 14-0 Panthers with 3:35 left in the third quarter. 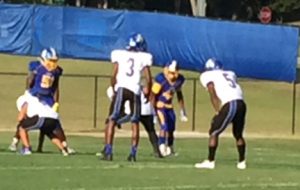 ASH JV quarterback Kanova Willoughby directing the offense as they attempt a two-point conversion. Willoughby started the game at quarterback for the JV Panthers.
Photo by Ken Gustafson

The Cougars responded with a drive of their own. Quarterback Cortez Thomas led the Crisp County offense on a drive that went all the way down to the Americus-Sumter eight-yard line. Thomas then gave the ball to running back Jacoby Harris, who scored from eight yards out to put the Cougars on the board. Crisp County went for two and got it. Just like that, the Panthers’ lead was cut to 14-8 with 6:57 left in the game.

ASH got a good run back on the ensuing kickoff and the Panthers were able to move the ball down inside the Crisp County 10-yard line. However, a false start penalty pushed them back. They went for it on fourth down, but the Cougar defense stopped them and the ball was turned over on downs.

However, the Cougars were unable to capitalize on offense, and the Americus-Sumter JV Panthers won the game 14-8.

ASH junior linebacker Jayce Hollis was pleased with his performance, as well as that of his team. However, he also realizes that they need to show more composure. “I think we did good, but at the end, we didn’t keep our head. We just need to work on that,” Hollis said.

Several of the Americus-Sumter JV players also play on the varsity. Junior wide receiver Hashim Haugabook is one of them. He believes that playing JV is helping him grow as a player. “It’s helping me get better,” Haugabook said. “It’s like a practice. It’s helping me do better on varsity.” Haugabook realizes that he and his JV teammates have some things to improve on. “We need to stop being selfish and we need to come together as a team and communicate with each other,” Haugabook said.