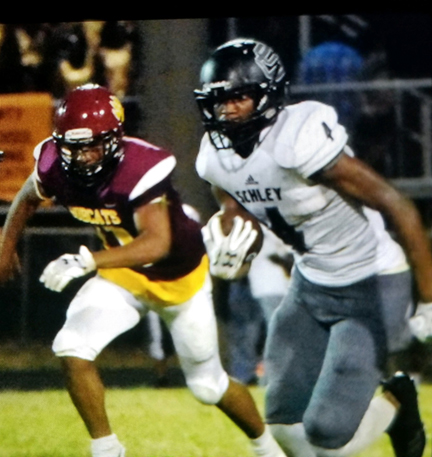 Schley County running back Tra Sampson rushed for 130 yards on 28 carries in the Wildcats' 23-6 win over Dooly County. Photo by Kricket Barineau

VIENNA – The Schley County Wildcats (4-1, 2-0) came into Vienna, GA Friday night ready to continue their success in region play. Thanks to an early first-half touchdown by running back Zamon Ross and a stout Wildcat defense, Schley County left Vienna with a 23-6 Region 4-Class A-Public victory over Dooly County.

Dooly County scored the first touchdown of the game, but missed the extra point. They led 6-0 until Ross ran the ball 17 yards for a Wildcat touchdown. William Blackwell’s extra point was good, and the Wildcats led the Bobcats 7-6. The rest of the first half was a defensive struggle between both teams. However, William Blackwell booted a 27-yard field goal to give Schley County a 10-6 halftime lead.

Schley County took over in the second half. Quarterback Garrett Peavy threw a 62-yard touchdown pass to Jamyron Clayton. Blackwell’s PAT was good, giving the Wildcats a 17-6 lead. The Wildcats put the icing on the cake when Ross scored his second touchdown of the night on a 25-yard run. The extra point was no good, but Schley County went on to win 23-6. 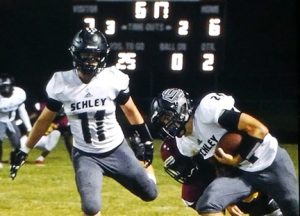 Schley County running back Landon Dailey fights for yardage with Lorne Barineau (11) to his left. On defense, Dailey led the Wildcats in tackles with six.
Photo by Kricket Barineau

Schley County running back Tra Sampson rushed for 130 yards on 28 carries. Zamon Ross rushed for 127 yards on 18 carries and scored two touchdowns. Quarterback Garrett Peavy didn’t have to throw the ball too much as the Wildcats relied on their strong running game. Peavy completed three passes on five attempts for 77 yards. His longest pass was that 62-yard touchdown pass to Clayton. That was Jamyron Clayton’s only catch of the game.

On the defensive side of the ball, Quontavious Clark and Jarrett Long each had a sack. Clark’s sack was for a four-yard loss and Long’s sack was for a nine-yard loss. Landon Dailey led the Wildcats in tackles with six. Dailey had three solo tackles and three assisted tackles. Jarrett Long had five tackles in the game against the Bobcats. Four of those tackles were solo and one was assisted.

The Wildcats have next Friday night off so they can heal up and work on things that need to be corrected before their next game on Friday, October 5. That night, they will travel to Butler, GA to take on another region opponent: Taylor County. Kickoff is scheduled for 7:30 p.m.