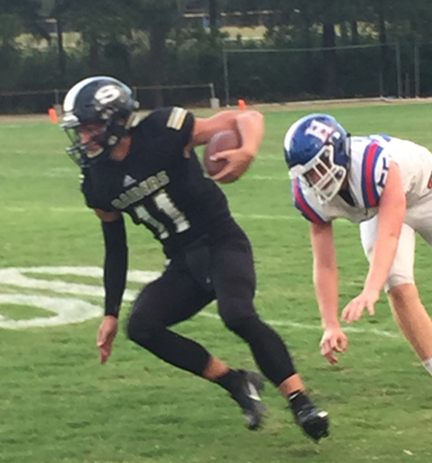 AMERICUS — It was a hard-fought battle throughout most of the game. Unfortunately for Southland (4-1), the Raiders fell to the Hawks of Heritage (Newnan) 15-14 on Friday at Harvey Simpson Stadium on Homecoming Night.

Both teams came into this game playing well. Heritage (Newnan) came into this game with a record of 4-1 overall and 1-0 in GISA Region 1-AAA. They lost a hard-fought game last week to Valwood 28-24. Southland was coming off a 48-7 route of Notre Dame Academy. They came into this game with an overall record of 4-0. Something had to give. The game ended much like the Raiders’ game against Westfield a few weeks ago. Southland won that game by the score of 15-14. Unfortunately for the Raiders, this time, they would end up on the wrong end, losing by the exact same score.

Southland had the ball deep in their own territory with a little over a minute left. However, quarterback Landon Law fumbled the ball and the Hawks recovered it, sealing their 15-14 win. 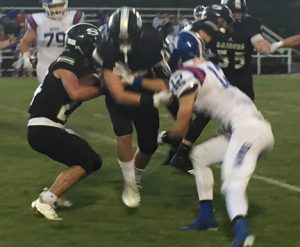 Southland running back Clay Owens with the ball. Freddie updike is trying to block for him. Owens scored two touchdowns in the 15-14 loss to Heritage (Newnan).
Photo by Ken Gustafson

To begin the game, Heritage won the toss and deferred to take the ball to start the second half. Southland, therefore, got the ball to start the game. On their first play from scrimmage, the Raiders were able to move the ball thanks to a nine-yard run by running back Clay Owens. The Raiders would get another first down on the drive. Unfortunately, however, the drive bogged down and the Raiders were forced to punt. From that point on until about one minute left in the first half, it was a defensive struggle between both teams. Neither offense could get any sustained drive going. This is a credit to both the Southland and Heritage defensive units. For Southland, Hunter McCain shone on defense. He had two sacks and a crunching hit on a Heritage wide receiver after the catch in the first half. McCain continued his good work in the second half as well. 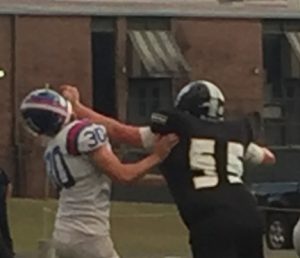 However, the Hawks finally broke through with 1:05 left in the first half. On 3rd-and-11 from the Southland 28-yard line, Heritage quarterback Henry Arnall threw a 10-yard pass to Peter Nell. Nell ran the ball 17 yards for a touchdown. Nell then kicked the extra point, and the Hawks led 7-0 at the half.

Heritage got the ball to start the second half, but the Southland defense was able to hold them in check. However, the Southland offense wasn’t able to mount a drive either. They were forced to punt with a little over six minutes left in the third quarter. On defense, the Raiders made their stand again. Hunter McCain made another play as he put pressure on Arnall. The Hawks were forced to punt, and the Raiders had another chance to mount a game-tying drive with a little under five minutes left in the third quarter.

The Southland offense finally put together a scoring drive. With 2nd-and-15 at their own 43, Law completed a pass to Parker Weldon, which was good enough for a first down. Clay Owens then ran the ball down to the Heritage 20-yard line. On the next play, Owens broke through the Heritage defense and ran the ball 20 yards for Southland’s first touchdown. The extra point by Zane Hines was good, and the score was knotted up at 7-7.

The Southland defense stopped Heritage on offense again and the Hawks were forced to punt. On the Raiders’ next drive, Owens found the end zone again. The junior running back ran the ball 35 yards for his second touchdown of the game to give the Raiders the lead. The PAT by Hines was good, and Southland led 14-7 with about eight minutes left in the game. 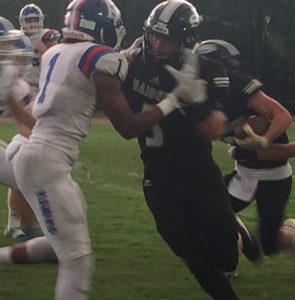 Parker Weldon trying to block for Clay Owens. Owens has the football in the background.
Photo by Ken Gustafson

However, Heritage struck right back. They marched the ball deep into Southland territory. The Raider defense made some stops and forced the Hawks into a 4th-and-10 situation. Hunter McCain tackled Heritage running back Andrew Rich behind the line of scrimmage to force the fourth-down situation. However, on 4th-and-10 from the Southland 24, Arnall completed a pass down near the goal line to put the Hawks on the door step of scoring a touchdown. Arnall would then score on a quarterback keeper to make the score 14-13 Southland. Instead of kicking the extra point, the Hawks decided to go for two. They made the two-point conversion, giving themselves a 15-14 lead with just over two minutes left.

Southland tried to make a game-winning drive. The Raiders had the ball deep in their own territory. However, the Heritage defense forced a fumble by Law. The ball was recovered by the Hawks. The Raiders fell on Homecoming Night 15-14. 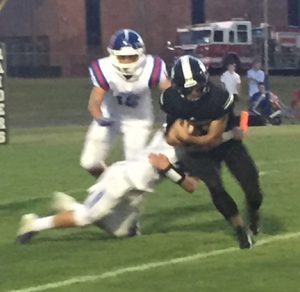 The Raiders have the week off next Friday, so they will have more time to fix what needs to be fixed and the players will be able to heal. Their next game is their first Region 3-AAA game on Friday, Oct. 5 at Brookwood in Thomasville. Kickoff is scheduled for 7:30 p.m.