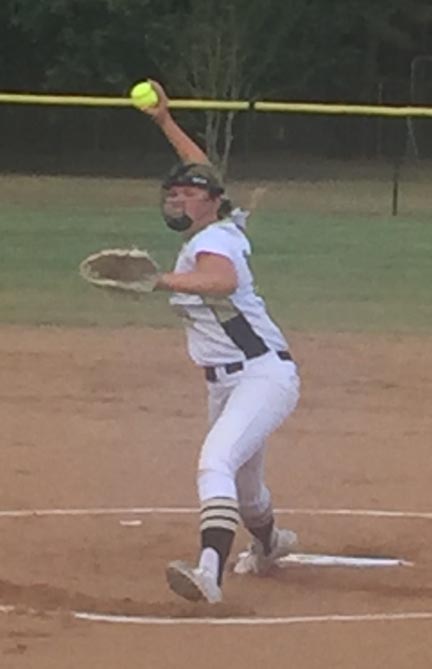 AMERICUS – The Southland Lady Raiders softball team (12-7, 4-1) had a chance on Tuesday to wrap up the GISA Region 3-AAA Championship if they could get a win over Valwood. However, Valwood starting pitcher Darcee Brown only gave up two hits the whole game to lead the Lady Valiants to a 5-0 win over Southland on Tuesday, September 25, at Southland Academy.

“The difference in today’s game and last week’s game against Valwood was that last week, we were able to score when we had early base runners in scoring position. We were able to score early, which put pressure on them,” Southland Head Coach Rusty Tondee said. “Today, we just weren’t able and fortunate enough to get the runs early. They’re a good ball club. They held us to two hits, I believe. They got them when they needed them. That’s just two pretty good softball teams playing. Maybe this will draw a big crowd for next week.” 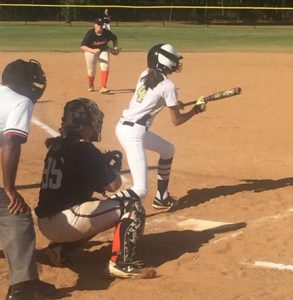 Southland’s Morgan Minick attempting to lay down a bunt against Valwood.
Photo by Ken Gustafson

Southland defeated Valwood in Valdosta 3-0 on Thursday, September 13. Coach Tondee was referring to a possible one-game playoff between Southland and Valwood to decide the region champion. If the Lady Raiders defeat Brookwood on Wednesday, September 26, that one-game playoff against Valwood will take place sometime next week at Southland Academy. The top three teams from each region qualify for the GISA Class AAA State Playoffs. Southland is assured of being one of those top three teams regardless of the outcome against Brookwood on Wednesday. 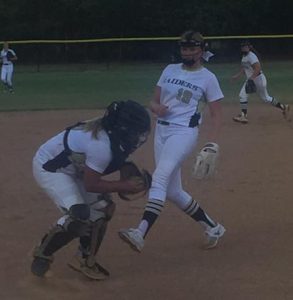 Southland catcher Sara Beth Storey fields a ground ball and is about to throw to first base.
Photo by Ken Gustafson

It was that way until the top of the fourth inning. With one out, Natalie Rojas and Darcee Brown both singled. Then Lindsey Browning drilled an RBI triple, driving in two runs. Bri Fosdick then hit a sacrifice fly to score Browning, and Valwood led 3-0.

The Lady Raiders had scoring opportunities in the first three innings. In the bottom of the first, Southland had runners at first and second with two outs, but Reese Roland lined out to end the inning. In the bottom of the second, Katie Rogers led off with a single. After Morgan Minick struck out, Abby Lightner singled and Hannah Mitchell hit into a fielder’s choice advancing the runners to second and third base. Ali Dent then drew a walk, and the bases were loaded for Southland with two outs. However, Holly McCain popped out to end the inning. 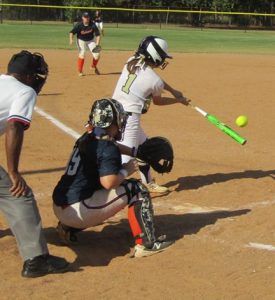 Southland’s Abby Lightner was one of only two players to gets hits against Valwood in the Lady Raiders’ 5-0 loss to the Valiants on Tuesday, September 25.
Photo by Ken Gustafson

For the game, the Lady Raiders left 10 runners on base.

Much of the credit is due to the pitching of Valwood starter Darcee Brown. Brown pitched all seven-scoreless innings. She gave up only two hits. She walked four and struck out three batters. Katie Rogers and Abby Lightner were the only Southland players to earn hits. Both came in the bottom of the second inning. Valwood scored their final two insurance runs of the game in the top of the seventh. 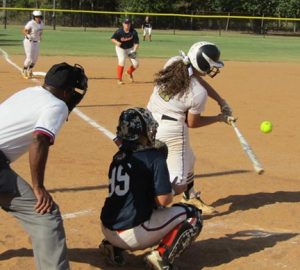 Holly McCain at the plate trying to make contact with the ball.
Photo by Ken Gustafson