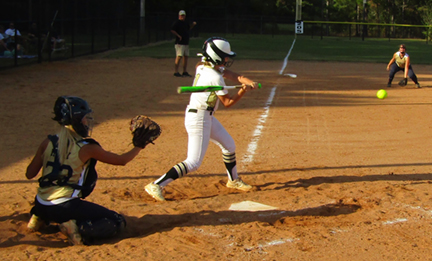 Southland’s Abby Lightner at the plate. Lightner went 1-for-3, scored a run and drove in another run in the Lady Raiders’ 10-6 loss to Tiftarea Academy. Photo by Ken Gustafson

Despite the loss, Southland Head Coach Rusty Tondee was not all that concerned. His main concern was the game that would take place at Southland the following day. The Lady Raiders are scheduled to host Valwood on Tuesday, October 2, in a one-game playoff to decide the GISA Region 3-AAA Championship.

In Monday’s game against Tiftarea, the Lady Raiders got off to a great start. In the bottom of the second inning, Southland scored four runs on three hits. They also took advantage of two errors and two walks. Highlighting the inning was a two-run double by catcher Sara Beth Storey.

For the first two innings of the game, Southland starting pitcher Rylan Youngdale held the Lady Panthers scoreless and only allowed two hits during the first and second innings. Youngdale also struck out two batters during those innings. However, trouble began for Southland in the top of the third. Tiftarea lead-off batter Morgan McKay drew a walk to lead off the inning. This was followed by a fielder’s choice by Elli Bryan. Sara Kate Lupo, who was the starting pitcher for Tiftarea, then doubled in the Lady Panthers’ first run. Laura Ann Jones reached on an error, then Ali Strength singled. Youngdale then hit Olivia Hancock, scoring another run for Tiftarea and cutting Southland’s lead to 5-2. However, Youngdale was able to pitch Southland out of the inning without any further damage. 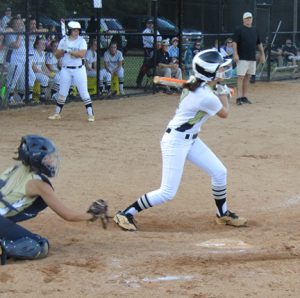 Southland’s Reese Roland at the plate. Roland scored a run and reached on an error for the Lady Raiders.
Photo by Ken Gustafson

The Lady Raiders responded in their half of the third. With one out, Katie Rogers singled. After Morgan Minick hit into a fielder’s choice, Abby Lightner drove home Rogers on an RBI single to give Southland a 6-2 lead. Tiftarea struck back in the top of the fourth when with one out, McKay drilled a triple. After Elli Bryan lined out to shortstop, Lupo singled in McKay to cut the Lady Raiders’ lead to 6-3.

In the top of the fifth, Tondee brought in Alli Dent to pitch in relief of Youngdale. Dent walked Ali Strength to begin the inning. Then Olivia Hancock drilled a double, driving home Strength to cut Tiftarea’s deficit to 6-4. Sara Beth Royal then singled and stole second base. Anslee Jones drew a walk, then Madi Hartsfield hit a double that scored two runs. Tiftarea had tied the game at 6-6. Dent was able to pitch out of the inning without any further damage, but the Lady Panthers had tied the ball game.

The Lady Raiders were unable to score any more runs for the rest of the game. This gave the Lady Panthers the opportunity they needed.

Southland tried to mount a comeback and salvage a victory in the bottom of the seventh, but Brookland Weaver grounded out and Reese Roland flew out. With two outs, Katie Rogers singled and advanced to second on a passed ball. However, Morgan Minick grounded out to end the game.

Rylan Youngdale started in the circle for Southland. She pitched four innings, giving up three runs on six hits. Youngdale walked two batters and struck out five. For Tiftarea, they were led offensively by Sara Kate Lupo. Lupo went 4-for-4 with two singles, two doubles and three RBIs. Lupo also scored a run for the Lady Panthers.