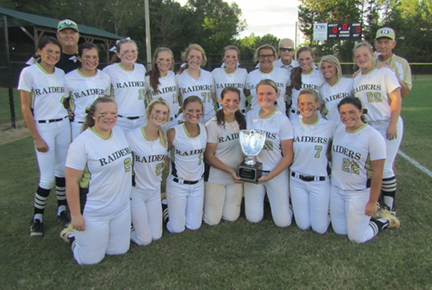 AMERIICUS – The Southland Academy Lady Raiders softball team, along with the coaches, parents and fans gathered at the Southland Academy softball field on Tuesday, October 2, with optimism and anticipation. Unfortunately, Valwood scored nine runs on nine hits, including a two-run home run by Graceigh Booth to end the game via run rule, shutting out Southland 9-0 and claiming the GISA Region 3-AAA Championship.

Had Southland defeated Valwood on Tuesday, September 25, the Lady Raiders would have won the region championship outright. However, Southland lost that game 5-0, forcing a tie-breaking, winner-take-all playoff game to decide the region title.

“They out hit us today. Their pitcher (Darcee Brown) is a really good pitcher,” Southland Head Coach Rusty Tondee said. “We had some runners on early and weren’t able to convert that into runs. They (Valwood)) were able to score runs when they had a chance. I’m looking at it as the glass is half full. We’re in the state playoff. Going in as the #2 seeded team, that’s an improvement from last year. Last year, we were the #4 seeded team. We’ve made continual progress from last year to this year. I’m very pleased with our progress, though I’m disappointed we didn’t win the region championship.” Tondee went on to say that he likes his team’s chances in the state playoffs. According to Tondee, the Lady Raiders will automatically make it to the second round by virtue of the fact that the region from which Southland’s opponent will come from doesn’t have a #3 seeded team (It’s 1 vs 4 and 2 vs 3). Therefore, Southland will advance into the second round of the state playoffs and will play Trinity Christian of Dublin on Saturday, October 13, in Dublin, GA. “I’m proud of our girls. We have practiced since July 8,” Tondee said. “We have put in a lot of effort, a lot of hard work and a lot of blood, sweat and tears. I couldn’t be prouder of these girls for a whole season of progress. I’m just so proud of them. I’m proud to take them into the playoffs.” 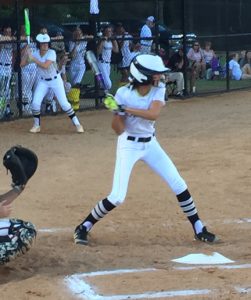 One huge factor in why the Lady Raiders struggled against Valwood was the pitching of Valwood ace Darcee Brown. Brown was dominating in the circle. She kept Southland off the scoreboard and gave up only four hits. She walked two and struck out four. The Lady Raiders had opportunities with runners in scoring position, but were unable to capitalize.

Southland was the visiting team in this game. Therefore, they batted first. In the top of the first with one out, Holly McCain and Sara Beth Story both singled. They both advanced to third and second respectively on a wild pitch. After Brookland Weaver struck out, Reese Roland was hit by a pitch, loading the bases for Katie Rogers. Rogers had gone 3-for-4 at the plate the day before in the win against Brookwood. However, she was unable to come through as she struck out to end the inning. In the top of the third inning, 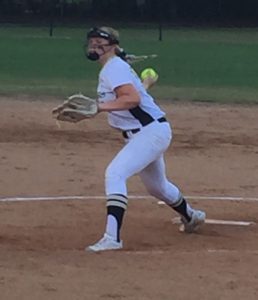 Southland had runners at first and second with two outs, but Brown was able to strike out Rogers again to end the inning. With one out in the top of the fourth, Abby Lightner singled for the Lady Raiders. Hannah Mitchell then hit into a fielder’s choice, advancing Lightner to second. However, Brown struck out Alli Dent to end the threat. That would be the last threat Southland would mount. In the top of the fifth inning, Holly McCain flew out to center field, Sara Beth Storey grounded out to second base and Brookland Weaver also grounded out to second base. That was Southland’s last at bat.

Southland starting pitcher Rylan Youngdale was able to hold the Valwood offense in check in the first inning. However, the Lady Valiants scored two runs on three hits in the bottom of the second. Ansley Haskard drilled an RBI double and Graceigh Booth got an RBI single in the inning.

The big blow for Southland was in the bottom of the third. Valwood scored four runs on four hits and took advantage of an error. Valwood second baseman Bri Fosdick doubled in two RBIs as part of the four-run inning.

Valwood added another run in the fourth inning to make it 7-0 in favor of the Lady Valiants. Then with one on and one out in the bottom of the fifth, Graceigh Booth belted a two-run home run to end the game on a run rule. 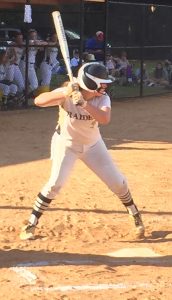 Holly McCain went 2-for-3 for Southland with two singles. Abby Lightner went 1-for-1 with a walk, and Sara Beth Storey went 1-for-3 with a single. In total, the Lady Raiders had four hits, committed two errors and stranded seven runners on base. Valwood scored nine runs on nine hits and committed no errors.

The Lady Raiders (13-9, 5-2) will begin the GISA Class AAA State Playoffs with a trip to Dublin, GA to take on the Lady Crusaders of Trinity Christian on Saturday, October 13. The first pitch of Game 1 of a best-of-three series is scheduled for 12 p.m. Game 2 will be at 2 p.m. The first team to win two games will win the series and will advance in the playoffs. If necessary, Game 3 will begin at 4 p.m.