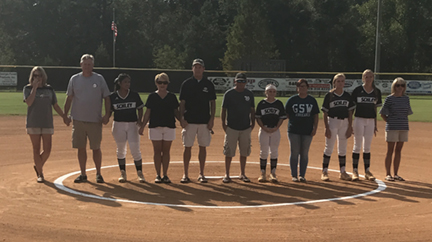 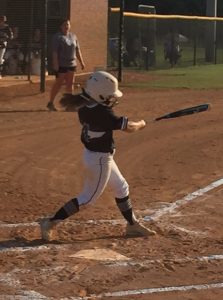 Schley County senior Kelli Rees went 2-for-3 with two singles, scored two runs and drove in an RBI in the Lady Wildcats’ 16-1 win over Dooly County.
Photo by Ken Gustafson

It was Senior Night on Thursday, October 4. Schley County honored three seniors before the scheduled double-header against Dooly County: Kelli Rees, Madison Tobin and Emily Campbell. All three were honored during a pre-game ceremony.

Dooly County’s lead-off hitter, Tierra Burden, singled against Schley County starting pitcher Perri DeVane. Takeira Lee drew a walk and advanced to second on a passed ball. Burden then stole third base. Burden then scored on a passed ball and Lee advanced to second base on that same pitch. That would be the only run of the game for the Lady Bobcats. Miracle Fields then struck out and Nazshe Robinson lined into a double play to end their half of the first inning.

The Lady Wildcats went to work right away in the bottom of the first. They scored 16 runs on six hits in the first inning alone. They also took advantage of six errors committed by the Lady Bobcats. That pretty much sealed the game for Schley County. The game was over after the top of the third inning due to a run rule, with Schley County winning 16-1. 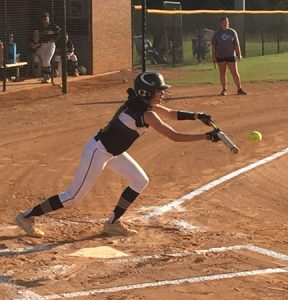 This was supposed to be a double-header, but the Dooly County coach decided to forfeit the second game, giving “Game 2” to Schley County. 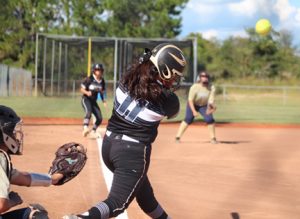 Schley County senior Madison Tobin at the plate for the Wildcats against Dooly County.
Tobin drew a walk, reached on an error and scored a run.
Photo by Sheila DeVane

Schley County (19-5, 9-2) will now await the results of other region games to see where, when and who they will play in the GHSA Class A-Public State Playoffs.