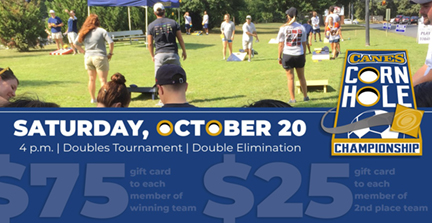 It is a free doubles tournament and it is limited to 20 teams, but at least one team member must be a GSW student, faculty member or staff member.

According to Keith Michlig, GSW’s Assistant Athletic Director for Communications and Marketing, this will be the third year the university has held the tournament. “The first year was a singles competition. Last year, we went to a doubles format,” Michlig told the Americus Times-Recorder. “We had 20 teams sign up last year and we’ll cap it at that again this year. We have to limit it to 20 due to time constraints. It takes too long otherwise. This isn’t meant to be an all-day affair, just some fun around the soccer matches. Nobody has signed up yet.”

After the tournament is over, contestants can stick around and watch a GSW soccer double-header. The Hurricanes will take on Lander University at 5 p.m. That game will be followed by the Women’s match against USC Aiken at 7:30 p.m. Those interested in participating in the GSW Canes Cornhole Championship must register online at www.gswcanes.com.