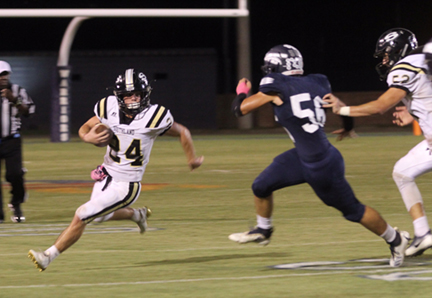 THOMASVILLE – The Southland Academy football team went down to Thomasville and scored a 30-20 hard-fought win over the Warriors of Brookwood.

Zane Hines opened the scoring for Southland by kicking a 31-yard field goal with 3:08 left in the first quarter to give the Raiders a 3-0 lead. Southland running back Clay Owens then scored a touchdown, followed by Hines’ extra point, to extend Southland’s lead to 10-0 with 9:23 left in the first half.

Near the end of the first half, the Raiders moved the ball all the way down to the 1-yard line of Brookwood. Quarterback Landon Law then scored on a quarterback keeper. The PAT by Hines was blocked, but the Raiders enjoyed a 16-0 halftime lead. 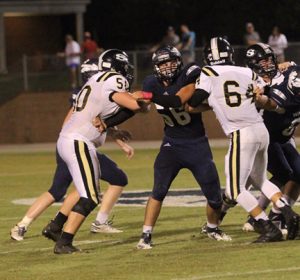 With 9:59 to go in the third quarter, Southland running back Parker Weldon scored from 12 yards out to give the Raiders a 23-0 lead. This time, Zane Hines’ PAT was good. Brookwood got on the scoreboard when Bridger Middleton scored from18 yards out. The PAT was good, and the Warriors had cut into Southland’s lead at 23-7.

With 11:41 left in the game, Brookwood scored again. The Warriors decided to go for two and failed, but the Warriors were within 10 points, trailing 23-13. The Warriors struck again when quarterback Joe Parker found Kurtis Brown for a 22-yard touchdown reception. The PAT was good, and Southland found themselves up by only three points at 23-20. 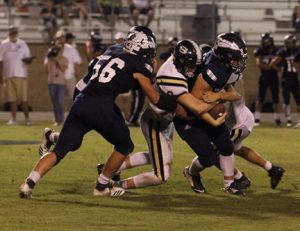 Brookwood was driving again to take the lead in the fourth quarter, but Owen Hufstetler got an interception to stop the drive. The Raiders scored another touchdown before the game ended. Owens scored his second rushing touchdown from 30 yards out. The PAT by Hines was good, and the Raiders were able to get out of Thomasville with a 30-20 win.