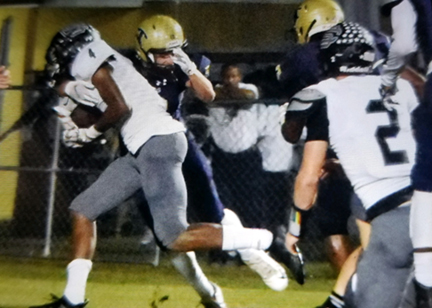 BUTLER – The Schley County football team took care of business Friday night, October 5, as running back Tra Sampson scored three rushing touchdowns to lead the Wildcats to a 41-7 route of the Vikings of Taylor County. Schley County improves to 5-1 overall and are 3-0 in Region 4-A Public play.

On the Wildcats’ first possession, running back Jamyron Clayton ran the ball 40 yards all the way down to the Taylor County 3-yard line. Sampson then scored his first of three touchdowns. The Wildcats decided to go for two, and running back Jakim hart scored on the two-point conversion to give Schley County an 8-0 lead with 9:49 left in the first quarter.

The Wildcats added to their lead a few minutes later in the first half. The Wildcats moved the ball down to the TC 12-yard line. Then Sampson scored his second rushing touchdown from 12 yards out. This time, head coach Darren Alford decided to kick the extra point. William Blackwell’s PAT was good and Schley County led 15-0. 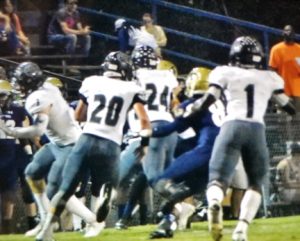 Schley County’s Trent Bivins (20) Ran a kickoff 72 yards for a touchdown in the Wildcats’ win at Taylor County.
Photo by Kricket Barineau

The Schley county defense forced a fumble late in the second quarter, which was recovered by Landon Dailey. A couple of plays later, running back Zamon Ross scored from two yards out. The PAT by Blackwell was good, and the Wildcats extended their lead to 22-0.

Taylor County got on the scoreboard when quarterback Jabin Ford threw a 25-yard touchdown pass to Ladarius Johnson. The PAT by Diego Paz was good, and Schley County’s lead was cut to 22-7.

However, the Wildcats reasserted themselves as Trent Bivins ran a kickoff 72 yards for a touchdown. Blackwell’s extra point was blocked, but Schley County extended their lead to 28-7. 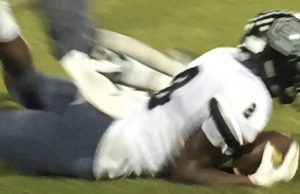 The Schley County defense stopped the Vikings again, forcing Taylor County to punt. On the Wildcats’ next possession, they moved the ball all the way down to the Taylor County 2-yard line. Sampson then scored his third rushing touchdown of the night to give the Wildcats a 34-7 lead by the end of the first half.

However, the Wildcats weren’t done. In the fourth quarter, they moved the ball down inside the TC 5-yard line. Zamon Ross then scored his second rushing touchdown. Blackwell’s extra point was good, and Schley County ended up winning the game 41-7.

The Wildcats will be home against Macon County next Friday night, October 12. Kickoff is scheduled for 7:30 p.m.