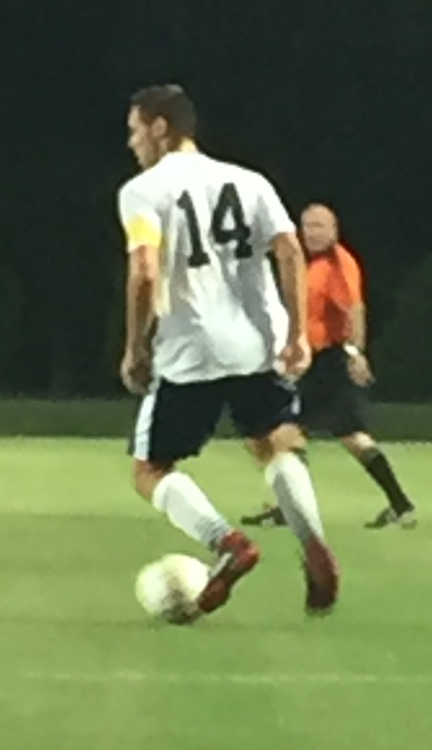 AMERICUS – The Georgia Southwestern University Men’s Soccer Team fought valiantly against the Pacers from the University of South Carolina Aiken Saturday night, October 6, at Hurricane Field. Both teams came into this match winless in the Peach Belt Conference and desperate for a conference win. However. Neither 90 minutes of regulation, nor two overtime periods could decide a winner. Therefore, the match ended in a 0-0 draw.

“We haven’t played a bad game in the league,” GSW Head Coach Warren Russ said. “We were ahead against Clayton State 2-1. Then they tied us and we lost on a fluky goal. We played hard against Young Harris College, who is ranked #3 in the nation. We played as hard as we could tonight. We had chances to win the game. They had chances to win the game. Now we have to go to Francis Marion and get some goals.”

The first half was pretty much an equally-played first half. Both teams had an equal amount of the run-of-play. However, neither team could get a goal before halftime.

In the second half, both teams created more chances to score. Eleven minutes into the second half, GSW forward Dylan Marshall drove towards goal and took a shot, but his shot was saved by USC Aiken goalkeeper Alejandro Chavarria. Later in the second half, the Pacers were whistled for a foul just outside the 18-yard box and the Hurricanes were awarded an indirect kick. Senior Thiago Elias took the indirect kick, but it sailed over the crossbar. Then with 41 seconds remaining in regulation, GSW earned a corner kick, but USC Aiken’s defense was able to clear the ball away from danger. Regulation ended with both teams unable to score a game-winner. It would have to be decided in sudden-death overtime. 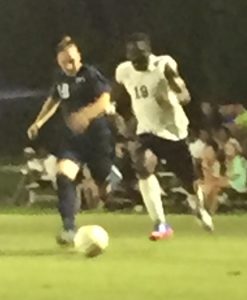 GSW forward Divin Moke with the ball against a USC Aiken defender.
Photo by Ken Gustafson

In the first overtime period, the Pacers had two opportunities to score on corner kicks. On the first one, the ball went to a USC Aiken player, whose shot hit GSW goalkeeper Francesco Bazzano in the chest. Bazzano was able to get his body in front of the shot to make the save. On another USC Aiken corner kick, the Pacers were able to get a shot off, but the shot went wide of the net. The Pacers had yet another chance for a game-winner, but Bazzano came up with another big save.

This was sudden-death. The first team to score a goal would win the match. The first overtime ended with both teams still unable to notch a game-winner.

During the second overtime period, Elias drove towards goal to try to give the Hurricanes the game-winner, but his shot was saved by Chavarria. USC Aiken defender Sammy Viada took a shot on goal to give his squad the game-winner, but Bazzano was up to the task and made the save. The second overtime period ended with no goals, and both teams had to settle for a 0-0 draw.

GSW is now 3-6-2 overall and 0-2-1 in the Peach Belt Conference. They will try to nail down their first win in the PBC when they travel to Florence, SC on Saturday, October 13, to take on the Patriots of Francis Marion University. Kickoff is scheduled for 7 p.m.