Lady Hurricanes get shut out by Young Harris 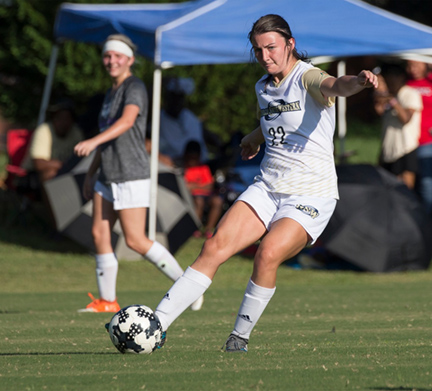 YOUNG HARRIS, GA – The Lady Hurricanes traveled to the North Georgia Mountains in hopes of winning a Peach Belt Conference match against the Lady Mountain Lions of Young Harris College. However, things didn’t go according to plan as Young Harris scored four goals in the first half on their way to a 5-0 shutout of GSW.

The Lady Hurricanes battled hard throughout the match, but were overmatched by Young Harris. Alison Rugel and Leila Hamed were the only GSW players to get a shot on goal. Emily Collum tried to get a shot on goal during the match, but her shot was off-target. Both GSW goalkeepers Alina Rodriguez and Hannah Morrone played in the match. They recorded a combined 20 saves for the Lady Hurricanes.

The Lady Mountain Lions (4-5, 2-3 PBC) took control of the first half. Elin Pederson scored in the 10th minute with an assist from Lailah Muscat. Ten minutes later, Pederson sent a pass to Britt Verstegen, who scored to put Young Harris up 2-0. In the 28th minute, Baylee Roche scored the first of her two goals off an assist by Verstegen, putting the Lady Mountain Lions up 3-0. Coleen Johnson then scored in the 40th minute to put Young Harris up 4-0 before halftime.

The Lady Hurricanes (2-9, 0-5 PBC) had three total shots throughout the game. Young Harris had 27 shots on goal and took 47 shots altogether. One of those shots ended up being Baylee Roche’s second goal of the game, which came in the 71st minute.

Young Harris dominated the run-of-play in this match, putting constant pressure on the Lady Hurricanes’ back line. This showed in the amount of combined saves Rodriguez and Morrone made for GSW (20). It also showed in the fact that Young Harris attempted 12 corner kicks, while GSW was not able to attempt even one corner kick.

The Lady Hurricanes, still searching for their first Peach Belt Conference win, will try to get it when they travel to St. Augustine, FL to take on Flagler College on Wednesday, October 10. Kickoff is scheduled for 3:30 p.m.