AMERICUS – For those who need ice, Food Lion has plenty of ice. As far as WAL-MART is concerned, at about 2:30 p.m. this afternoon, they only had six 10-lb. bags of ice. 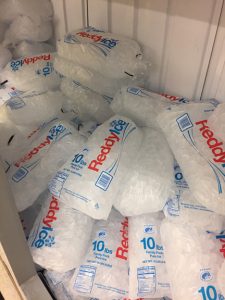 For those needing ice, Food Lion has plenty of ice.
Photo by Ken Gustafson

However, Assistant Manager Trista Jenkins told the Americus Times-Recorder that they expect to have a truck load of ice coming in a couple of hours.

At last report, Save-A-Lot said they had 13 10-lb. bags of ice. CVS, at last report was out of ice. However, according to store manager Jerry Weatherspoon, he was trying to order more ice and thought that it would arrive either sometime this afternoon or tomorrow depending on how quick the vendor is able to deliver.

Another curfew for Americus and Sumter County

A mandatory curfew will be in effect for all of Sumter County between dusk Thursday (7 p.m.)  and dawn on... read more