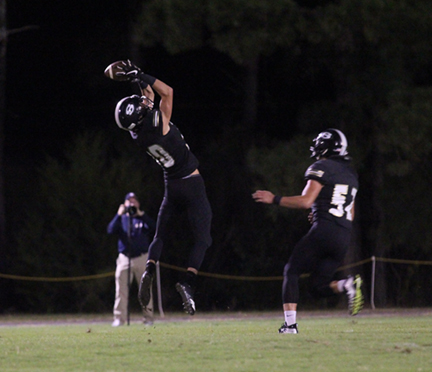 Southland defensive back Ross Minick with a key interception in the Raiders’ 35-20 win over Valwood. Photo by Sheri Bass

AMERICUS – The Southland Academy Raiders (6-1, 2-0) won their second region game in a row when they defeated Valwood by the score of 35-20 in a big GISA Region 3-AAA game Friday night, October 12, at Harvey Simpson Stadium.

The Raiders played as if they were not at all distracted by the weather-related events that hit this area.

“It’s just a credit to the kids and their families and this whole community,” Southland Head Coach Rod Murray said. “We’re just so blessed that we’re able to get out and play this game so that our community can have something normal to focus on with everything going on. We had a great football environment. We just thank all of the emergency responders and all of the electricians that are working so hard to get this community back and going. We’re so thankful to be out here and the kids played their hearts out for everyone involved.”

Valwood won the coin toss, but deferred till the second half. The Raiders took advantage of that decision. The Raiders started with poor field position on their own 12-yard line because of a penalty on the kickoff. However, quarterback Landon Law completed a pass to Luke Law to give Southland some breathing room. The Raiders were able to move the ball down into Valwood territory. Then running back Owen Exley ran the ball all the way down to the Valwood 16-yard line. A couple of plays later, Clay Owens scored the first of his three rushing touchdowns from one yard out. The extra point by Zane Hines was good, and Southland led 7-0 with 5:52 left in the first quarter.

Near the end of the first quarter, Southland had the ball deep in their own territory. On 3rd-and-7, Owens ran the ball 80 yards down to the Valwood nine-yard line. Then on first and goal from the nine, Parker Weldon scored his first touchdown to put the Raiders up 14-0 with 1:03 left in the first quarter. 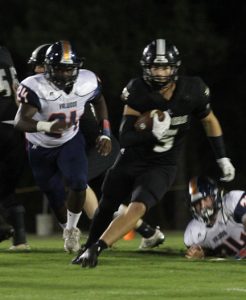 Southland running back Parker Weldon (5) running with the ball. Weldon scored two touchdowns in the 35-20 win over Valwood.
Photo by Sheri Bass

The Raiders continued to pour it on. This time, the Southland defense made a big play. On second down, Valwood quarterback Caleb Burns threw a pass that was intercepted by Ross Minick. The Raiders made the Valiants pay for that turnover when Owens ran 22 yards for his second touchdown of the game. The Raiders were enjoying a 21-0 lead with 11:42 left in the second quarter.

The Raider defense stifled Valwood’s offense the entire first half. Southland was able to get the ball back with a lot of time left. The Raiders were able to move the ball into Valwood territory. Then on 3rd-and-7 from the Valwood 49, Landon Law threw a pass to Weldon, who ran the ball 49 yards for another Southland touchdown. The extra point by Zane Hines was good, and the Raiders enjoyed a 28-0 halftime lead. 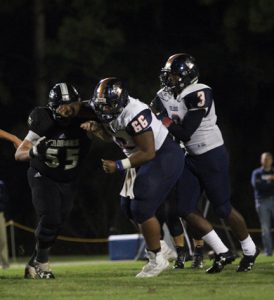 Ragan Norman blocking for the Raiders against Valwood.
Photo by Sheri Bass

Valwood got the ball to start the second half. It didn’t take them long to get on the board. Running back Willie Roberson ran the ball down to around the Southland five-yard line. On 2nd-and-goal from the five, Caleb Burns scored on a quarterback keeper. The extra point was no good, but Southland’s lead was cut to 28-6.

The Raiders responded with a long drive of their own, capped off by Owens’ third touchdown of the night to give Southland a 35-6 lead.

However, on the ensuing kickoff, a fight broke out between a Southland and a Valwood player. A dead-ball personal foul penalty was called on both players, and both were ejected from the game. This seemed to ignite the Valiants as they were able to move the ball down to the Southland 17-yard line. On first-and-10 from the Southland 17, Burns threw a 17-yard touchdown pass to Ashton McNeil. The PAT was good, and Southland led 35-13.

The Valiants would not quit and they struck again in the fourth quarter. They were able to move the ball into Southland territory. The Southland defense was able to force a 4th-and-19 from the Southland 35. However, Burns threw a 35-yard touchdown pass to Zach Paulk. The extra point was good, and all of a sudden, the Valiants were within 15 of the Raiders at 35-20 with 6:28 left in the game.

The Raiders attempted to keep the ball on the ground and use their running game to run clock in the fourth quarter. It worked as the Raiders were able to gain first downs on the ground and run the clock down. They were able to run the ball down inside the Valwood 10-yard line. With under 30 seconds left, Weldon ran the ball down to the three-yard line, but the Raiders didn’t need to score another touchdown. They ran out the clock for a 35-20 Region 3-AAA victory over the Valiants.

Southland is now 2-0 in GISA Region 3-AAA play, while Valwood drops to 0-2. The Valiants are 5-3 overall. For Southland, Clay Owens ran the ball 25 times for 177 yards and scored three touchdowns. Parker Weldon rushed for 85 yards on 15 carries and scored one rushing touchdown. His other touchdown was the 49-yard pass reception from Landon Law. Law completed 5-of-7 passes for 105 yards and threw one touchdown pass. Weldon also led the Raiders in receiving with three catches for 71 yards and a touchdown reception. On defense, Hunter McCain led the Raiders with four tackles. Owen Hufstetler had two tackles and a sack for the Raider defense.

Southland will try to continue their success next Friday night, October 19, when they host another region opponent: The Knights of Deerfield-Windsor. Kickoff is scheduled for 7:30 p.m.