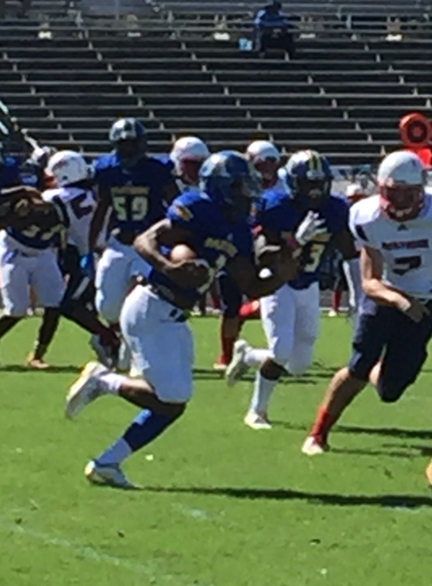 AMERICUS – Hurricane Michael caused a lot of power outages in the area around Americus-Sumter High School. Therefore, the Panthers’ Region 1-AAAA home game against Northside (Columbus) was moved to Saturday, October 13, at 12 p.m.

Having lost two-straight region games, the Panthers were desperate to get a win against the Patriots.

“Our defense played a heck of a ball game,” ASH Head Coach Larry Harold said. “They had been undisciplined the last two weeks. The defensive coaches got on to them and straightened out some things. I’m just so proud of these kids coming out here on a beautiful Saturday afternoon and playing hard, considering the things that have been going on. Some of these kids still don’t have power in their homes. I’m so proud of this school and its administration. I’m proud of these kids coming together and giving back to this community by playing so hard. It wasn’t pretty, but we’ll take it.”

The Panthers got the ball first to start the game, but quarterback KJ Harvey’s pass went off the hands of Lemario Larry and into the hands of Northside (Columbus) defensive back Jhaquez Anderson for an interception. However, the Panther defense stopped the Patriots and forced them to turn the ball over on downs. The Panthers had the ball near midfield. On 3rd-and-7, Harvey ran the ball for 13 yards for a first down into Northside (Columbus) territory. By that time, the first quarter ended with both teams scoreless. 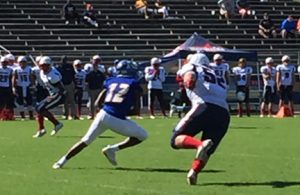 To begin the second quarter, the Panthers had the ball in the Patriots’ territory at the Northside (Columbus) 23-yard line. The officials took a time out for a measurement. It was determined to be 3rd-and-short. They gave the ball to running back Montrellis Wilson, who ran the ball for first-down yardage down inside the 10-yard line. On 3rd-and-3 from the Patriots 7-yard line, the Panthers were flagged for a false start penalty, pushing them back to the 12-yard line. Harvey got five yards on a quarterback keeper, but it was 4th-and-3. Kevin Abarca came in and kicked a 26-yard field goal to give Americus-Sumter a 3-0 lead with 8:50 left in the half.

The Patriots moved the ball into ASH territory on their next drive, but running back Corey Washington fumbled the ball, and it was recovered by Jacoby McCuller for the Panthers. ASH took advantage of the turnover by moving the ball down into Northside (Columbus) territory. On 3rd-and-11 from the Patriots’ 43, Harvey found Michael Johnson in the end zone for a 43-yard touchdown pass. Kevin Abarca’s PAT was no good, but the Panthers had a 9-0 halftime lead.

The Patriots got the ball to start the second half and returned the kickoff into Panther territory. They immediately moved the ball inside the ASH 20 thanks to the running of Fredrick Davis Jr.

However, a holding penalty against Northside (Columbus) pushed them back. The Panthers forced a 3rd-and-11 situation. Quarterback Chandler Blanton’s pass was incomplete, forcing 4th down. The Patriots tried a field goal, but Kade Werner’s kick was no good, giving the Panthers a 1st-and-10 from their own 20. KJ Harvey ran a quarterback keeper and was tackled out of bounds, drawing a personal foul penalty against the Patriots. This moved the ball closer to midfield for the Panthers. The drive for ASH bogged down around midfield, forcing a punt. 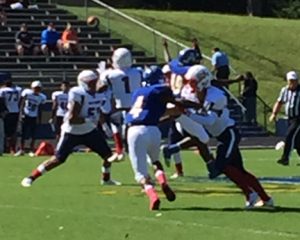 Americus-Sumter defensive back Bradley Perry tries to make a play against the Patriots.
Photo by Ken Gustafson

Northside (Columbus) had the ball inside their own 10-yard line, thanks to a good punt by Aaron Sandwich. However, the Patriots moved the ball on offense and were aided on a false start penalty on the Panthers. Northside (Columbus) was able to move the ball down to the Panthers’ 15-yard line. The third quarter ended with ASH up 9-0. However, the Patriots were knocking on the door.

ASH forced Northside (Columbus) into a fourth-down situation. Chandler Blanton’s pass was complete, but short of first-down yardage. The Panthers got the ball back deep in their own territory. However, Wilson fumbled, and the ball was recovered by the Patriots. Northside (Columbus) took advantage of the turnover as running back Frederick Davis Jr. scored. The PAT was good, and ASH led 9-7.

The Panthers were unable to mount a drive and were forced to punt. Aaron Sandwich’s punt went back inside the 20, but the Patriots punt returner muffed the punt, and the ball was picked up by Quevolia Willoughby in the Patriots’ territory. A holding penalty pushed ASH back to their own 43. Another holding penalty pushed the Panthers back even further, making it 1st-and-30 from the ASH 47. On 3rd-and-30, Harvey’s pass was complete to Lemario Larry for 25 yards. An encroachment penalty moved the ball even further. Then Harvey gained first-down yardage on a quarterback keeper to the Patriots’ 20. A five-yard run by Wilson moved the ball to the 15-yard line. On 3rd-and-4 from the 15, Harvey scrambled and lost yardage, bringing up 4th-and 7 from the 18. A delay of game penalty pushed the Panthers back to the 23 of Northside (Columbus), making it 4th-and-13. On 4th down, Harvey’s pass was knocked away by Jhaquez Anderson. The ball was turned over on downs to the Patriots.

Northside (Columbus) moved the football up to midfield, but a holding penalty and dropped pass forced a 4th-down situation. However, the Patriots converted on 4th down to keep the drive alive. However, a couple of plays later, a false start penalty forced Northside (Columbus) into 3rd-and-12. Blanton’s pass was incomplete, but pass interference was called against the Panthers. Coach Harold ran out on to the field to protest the call. The call was changed to defensive holding. It was 3rd-and-2 for Northside (Columbus). Davis Jr. got the necessary yardage. He then ran the ball down to the Panthers’ 18-yard line. Northside (Columbus) was driving for either a winning touchdown or field goal. There were 41.7 seconds left in the game.

With 3rd-and-2 from the Panthers’ 18, Blanton’s pass was tipped at the line of scrimmage, forcing 4th down. This was the ball game right here. Kade Werner would be trying a 34-yard field goal to win it for the Patriots. However, Werner’s kick was no good. The Panther’s Trevion Thomas returned the ball to the other end zone, thinking he was scoring a touchdown. However, that is not allowed in high school football.

Regardless, the Panthers won a hard-fought game by the score of 9-7, ending their two-game losing streak.

ASH will travel to Cairo, GA to take on the Syrupmakers of Cairo in another Region 1-AAAA next Friday, October 19. Kickoff is scheduled for 7:30 p.m.